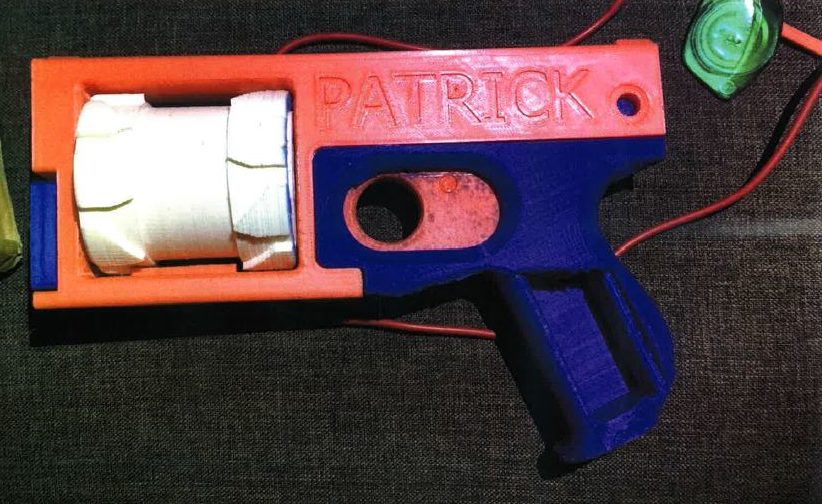 A 3D gun that Muswere had made using his printer

A London South Bank University student is the first person in the UK to be convicted and jailed for making a gun with a 3D printer.

According to the Crown Prosecution Service (CPS)  he is the first person in the UK to be convicted and jailed for possessing unlicensed firearms made with a 3D printer.

The CPS say he had claimed the firearms were for a sci-fi film he was making for a university project – and even claimed he found ammunition rounds in a park.

The court was told police previously raided Muswere’s home on Pimlico’s Lillington Gardens Estate twice because of his ‘known links’ to cannabis growing.

While there, they found two 3-D printers that were in the process of printing a revolver barrel, and numerous components for making Washbear and Reprringer guns – both of which are 3-D printable firearms. On the second occasion, Muswere threw an unfinished and melted 3-D printed cylinder for a handgun out the kitchen window as police forced their way inside.

The CPS say experts found that the only pieces missing for many of Muswere’s printed handguns to become lethal weapons were steel tube sleevings needed to cover the handguns.

But Muswere had repeatedly searched for these on the internet, found investigators.

“Muswere claimed that the firearms found in his flat were made for a university film project and were incapable of firing deadly shots,” said Claire Holder, from the Crown Prosecution Service.

“However, he was using 3-D designs found on the internet which were specifically for the making of live firearms.

“Evidence also showed that he had made repeated attempts to print the weapons, which we believe showed that he was trying to perfect a workable firearm.”

The destruction of the firearm and parts was also ordered by the court.

It is illegal to possess or manufacture prohibited weapons without a license.