The nineteen-year-old then did not stop to look at his victim – and instead attempted to walk out the building with a t-shirt over his head, the court heard 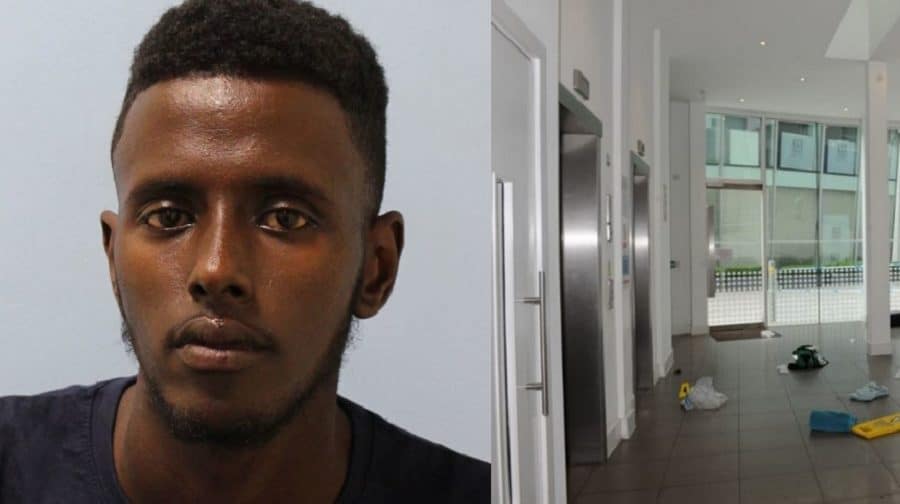 A nineteen-year-old has been convicted of pushing a woman from a fourth-floor balcony in Borough’s Long Lane after making inappropriate advances to her at a party.

Yusef Ali, of Corry Drive, Brixton, was found guilty of section eighteen grievous bodily harm, affray and possession of an offensive weapon at Croydon Crown Court on Tuesday, but cleared of attempted murder.

His attack left his eighteen-year-old victim in hospital for several weeks with a fractured back and neck, and she has since not been able to go back to work or college.

The court heard how Ali and his pals had booked out a luxury fourth-floor flat at Long Lane’s Empire Square for an overnight party on August 3.

Word of it spread and at around 3am the victim and her friends arrived at the party along with other party-goers.

Ali had never met her before, but took an immediate interest in her, the court heard, grabbing her and pulling her hair to get her attention.

He put his hand in the thigh rip of her jeans and aggressively placed his arm around her neck – saying “this is what I do in the bedroom,” adding it was “just banter.”

The victim became agitated, and ignored him. The court heard that when a group of boys arrived at the party at 9am, a brawl broke out – and Ali, after suffering cuts to his lips and head, went on the rampage with a knife.

He began waving the knife in people’s faces, lashing out and stabbing two men as they tried to flee the flat, the court was told.

Both men have since recovered.

The victim was said to be frantically trying to call for a lift when Ali approached her with knife in hand. She ran over to the balcony, and shouted for help – when Ali ran and pushed her over the ledge.

Shockingly, the court heard how the nineteen-year-old then did not stop to look at his victim – and instead attempted to walk out the building with a t-shirt over his head.

“This was a senseless act of violence during a party that went badly wrong. Ali claimed he did not push the victim and did not see who did,” said Katherine Iyer of the Crown Prosecution Service.

“But unlike every other person who walked down the steps, he did not stop to look at the victim in distress on the floor, rather he pulled his T-shirt up over his face and left the building just as police officers were walking in.” The distance the victim fell when pushed

After being arrested by cops, a blade handle in his pocket was matched to a knife used in the stabbings at the flat.

“Ali violently pushed an innocent 18-year-old woman off a fourth floor internal balcony in a fit of rage which had already seen him stab two men,” said DC Tom Waller, of the Met.

“It was only by sheer luck that she was not more seriously injured and although she is recovering well, this incident has had a huge impact on her life.

“Ali did not care who he injured that night and was clearly intent on harming anyone in his path.”

The attacker is “now likely to face a significant time in prison,” added DC Waller. Sentencing is due on Thursday, March 5.