Frank Davis was remembered by Scouts and Cubs from his Bermondsey group, 75 years after his death 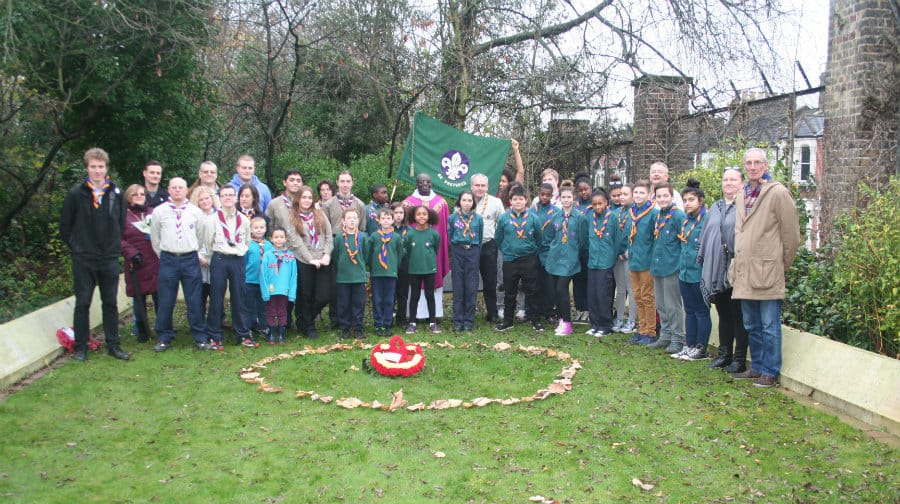 Long lost family members of a brave seventeen-year-old boy scout, who was killed rescuing a friend after a bomb hit Trinity Dockhead Church in 1940, were able to attend a memorial service to him at the weekend.

A Bermondsey scout group leader has spent the last few months tracking down the nieces and nephew of Frank James Leopold Davis, to make sure they could see the proud moment when he was remembered for his courageous actions 75 years ago.

During the Second World War, over 50,000 Scouts trained to undertake National War Service jobs, including acting as police messengers, firemen and stretcher bearers, like young Frank, who lived in Parkers Row with mum Alice and dad, Frank, one brother and three sisters.

As a Scout at the 11th Bermondsey & Rotherhithe, Frank became a voluntary air raid patrol messenger, working alongside his father who was a full time air raid warden.

On December 8, 1940, Frank reported for duty at the Most Holy Trinity Church, Dockhead.

That night the bombs rained down thick and fast and the church was hit. Frank managed to get himself out from the rubble, but when he found out a fellow scout was trapped inside, he bravely went back in.

Accounts of what actually happened varied in the different newspapers of the day, but the incident was widely reported. According to the South London Press Frank had: “just been back to the post to report, and was then leaving the post, when the bomb fell and he was caught by its blast.”

The “News Chronicle” said he was “killed by a bomb soon after saving two people pinned under the debris of a house”.

The Daily Mirror reported that “Davis, a warden, was on his beat when he found a fellow A.R.P. worker with a serious eye injury. He gave him first-aid treatment, took him to a post for further attention. Then he set out for his usual patrol – and was killed, while The Times stated he was killed after “rescuing a wounded fellow-messenger.”

Frank was seventeen at the time of his death.

Following a history page in the News earlier this year mentioning Frank’s heroism, current 16th Bermondsey scout leader, Bryan Jones, set about organising a memorial service to the brave boy at Nunhead cemetery where he was buried.

After setting up a website to gather information about Frank at www.bravescout.com, Bryan was inundated with information and was even put in touch with Frank’s sister, two nieces and nephews.

Frank’s sister, Joyce, was unable to attend the memorial service on Sunday due to ill health but his nieces Janet Eglinton and Karen Bentham came along with their brother Peter West.

“We can’t believe we didn’t know anything about it,” said Janet, who lives nearby in Brockley.

“We knew he had died in World War Two but we never knew the details,” she added.

“Mum would’ve loved this,” said Peter, “that a member of the family was being recognised like this.”

Frank as a baby with mum, Alice

After months preparing for the service, led by Father Dele Ogunyemi of St Anthony and St Silas, Bryan said: “I was delighted with the turnout from 16th Bermondsey Beavers, Cubs and Scouts along with Shard Explorer Scout Unit on a cold, damp December afternoon. It was the culmination of a lot of research by a large number of people. 16th Bermondsey leaders did themselves proud co-coordinating everything and Albins who kindly provided a minibus and driver to help us all get there.”