Lorry and pedestrian incident in Peckham High Street was not a collision, police confirm 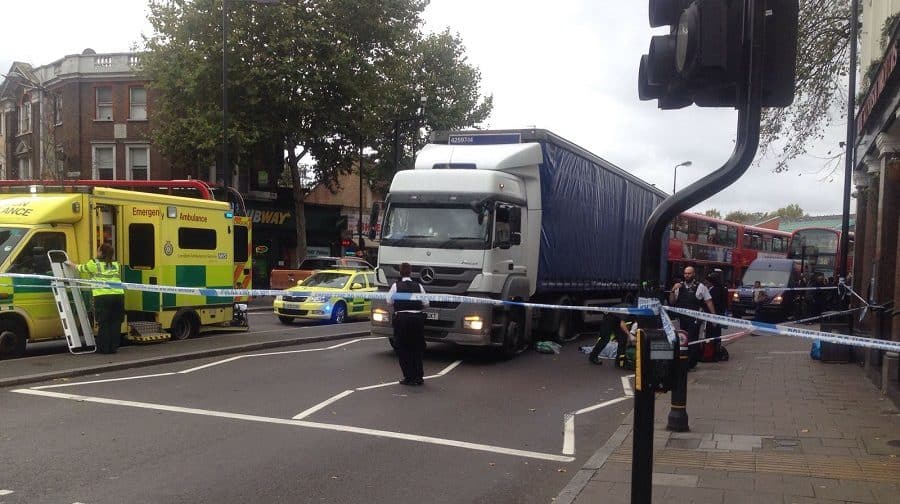 Police have confirmed that yesterday’s incident in Peckham High Street, involving an elderly man and a lorry, was not a collision.

Initial statements from Police on Tuesday said they were called after receiving multiple reports of a collision between a male pedestrian in his 80s and the lorry.

A Met spokesman confirmed this morning that the man had in fact fallen down in the road, and the lorry had stopped before potentially running him over.

The elderly man was taken by ambulance to a south London hospital, where he was later reported to be in a “stable condition” with minor injuries. An Air Ambulance was called, but not used.

But the near-miss follows the tragic death of 74-year-old Peckham man Peter Allingham, who was killed on September 4 after a collision with a lorry, as he crossed the road in front of the Kentish Drovers.

On September 4, 2015, pensioner Mary O’Leary was also knocked down and killed at the same crossing.

Yesterday’s incident prompted renewed calls for the busy junction (owned by Transport for London) and often used by heavy goods vehicles, cyclists and pedestrians, to be made safer.

Councillor Ian Wingfield, Southwark Council’s cabinet member for environment and the public realm, said: “We were in talks with TfL the day after a pedestrian was killed here, not even two months ago, and were reassured that they were making progress with designs to improve safety at this location.

“But, two pedestrians have already lost their lives here and another has been hospitalised today [Tuesday]. I would appeal to TfL to deliver the work that has been promised, as a matter of utmost urgency.”

Cllr Wingfield added: “We were told by TfL that improvements to Peckham High Street were part of a programme of works going on across London. We will be doubling our efforts to encourage TfL to bring these improvements forward.”

Graham Nash, head of network sponsorship at TfL, on Wednesday said: “The safety of all road users is our top priority and we are constantly reviewing our road network to ensure it remains as safe as possible. We are aware of ongoing concerns raised by residents and the council about Peckham High Street and are committed to making safety improvements. We are currently finalising our designs and aim to consult on our plans next year.”

Southwark NewsNewsLorry and pedestrian incident in Peckham High Street was not a collision, police confirm