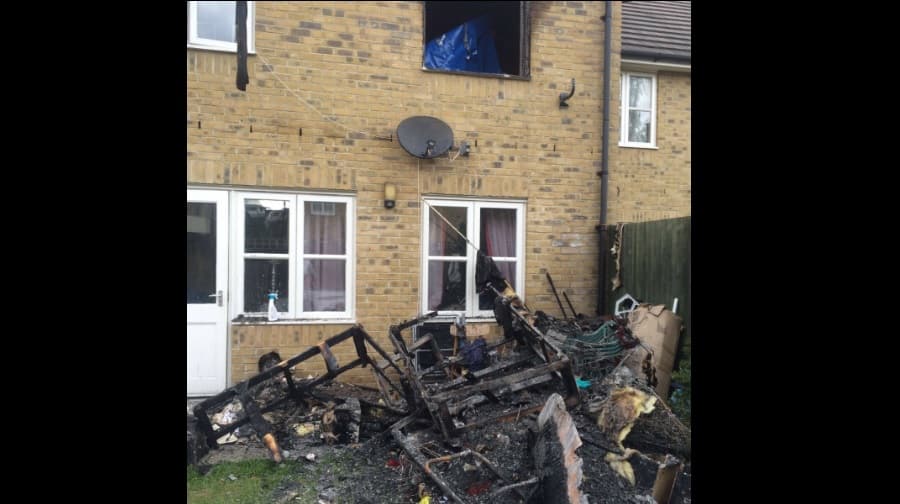 The loving friend of a Peckham family who lost nearly everything in a devastating house fire is on a mission to raise £15,000 to help rebuild their lives.

Shade Bokkini and her family were lucky to be staying at her best friend Dionne Amoo’s flat in Walworth on the night an unattended candle nearly destroyed their house in Bansfield Road.

Shade, 31, was in disbelief when a friend messaged her a video of her own home on fire in the early hours of July 29.

She made her way to the home she shares with her sister, two brothers, her cousin, and baby son, to find four fire engines blasting away at the flames lapping within the house.

Shade Bokinni checks the debris in her burnt home

“We were all just standing there with firemen and the neighbours coming to help. I felt fine but they were all saying ‘no, your house is burning down, you’re in shock’. I just couldn’t believe it.”

A friend was staying at the family home on the night, and it’s believed that a gust of wind blew a lit candle, starting the blaze.

Shade added:?“It managed to even burn through a thick fire door and the rest of the first floor. But the whole house is damaged from water damage or fire damage.

“The smoke would definitely have killed us if we had been asleep there. Even one of our neighbours was taken to hospital for smoke inhalation.”

Though the house will not need to be demolished, the family could be waiting eight months before it’s ready to live in again.

Since that night the family has fallen into the arms of Dionne, 31, and has been living on her sofa and in borrowed clothes.

Dionne said: “I had to have Shade over. She has always welcomed us over to her house and made it the place we have parties and cook food. It’s always been a home to us as well so I couldn’t believe it.

“They have almost nothing. Rummaging through the house there was almost no trace of so many of their things.

“Starting again for them is going to be like having a blank canvas. They need to literally replace everything, and when you total all of that up, it’s going to cost a ridiculous amount, so we all want to help.

“When you see a friend go through this, or even a friend of a friend, you just dread to think what if it happened to you. If there’s anything I can do to help I’m raring to go.”

Shade added: “You really feel like you’re part of a community when something like this happens. I don’t even feel upset because this has been so overwhelming.”

The grateful Peckham mum also said she wanted to mention people who helped out on the night of the fire, as well as those who have donated money and clothes and furniture.

“The firemen – I think they’re called the Peckham Reds – were amazing. They’ve called to check how we are and they have helped try to find us accommodation.

“I also want to thank a guy called Grant Campbell who was running around getting water, tea, bacon and eggs and loads of food for the firemen.”

To donate and help out Shade and her family visit: www.gofundme.com/2hvcsas