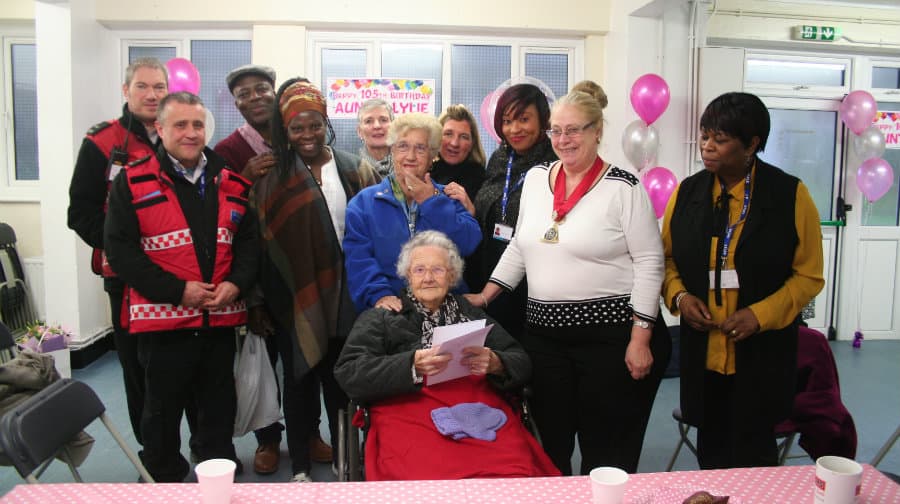 Lylie Mercer with family and friends at her 105th birthday bash

A lifelong Walworth resident enjoyed a sing-song at her birthday bash on Tuesday to celebrate turning 105!

Eliza ‘Lylie’ Mercer said she felt “lucky” as she sat surrounded by friends and family at the party in Nelson House, Bronti Street.

“I’m lucky to have people to come and see me,” said Lylie, “everybody knows me in Walworth.”

Born in nearby Brandon Street, twice married Lylie has lived through two world wars. She still remembers when her uncles went off to fight in the Great War – Charlie was killed, Harry was blinded and Bill was forever after known as ‘Uncle Peggy’ after he had his leg blown off.

During the Second World War, she remembers how many of her friends and neighbours perished when St Peter’s Church was bombed, where hundreds were sheltering in the crypt. Lylie was in an Anderson shelter nearby and escaped unharmed, but a local Italian family who had made her sister-in-law’s wedding dress were all killed.

Before family houses had baths in them, Lylie had to go down to near where she worked at Cross & Blackwell’s in Bermondsey to have a bath. But while she was in there the air raid siren went off and she remembers having to scamper down the street clutching her corset under her arm.

Lylie has always put her long life down to her clean living. “I never drank, I never smoked and I never went with men,” she told the News.

The oldest of eight children, Lylie was thirteen when she came home from school to help her mum give birth to her little brother Danny, whom she always looked after until his death last year.

Having lived in her block on Portland Street for more than 30 years, Lylie is well known in the area and still gets a visit from some of the traders on East Street market, who used to get their copy of the News delivered by “the oldest ‘paper girl’ in the world.”

When Lylie turned 100 she was still picking up copies of the paper for the “old people” in her building and her community spirit earned her the title of Good Neighbour of the Year in 2009.

Lylie’s special cake made by a friend of the family