‘Mace’ and knife found in sweep for weapons in Peckham 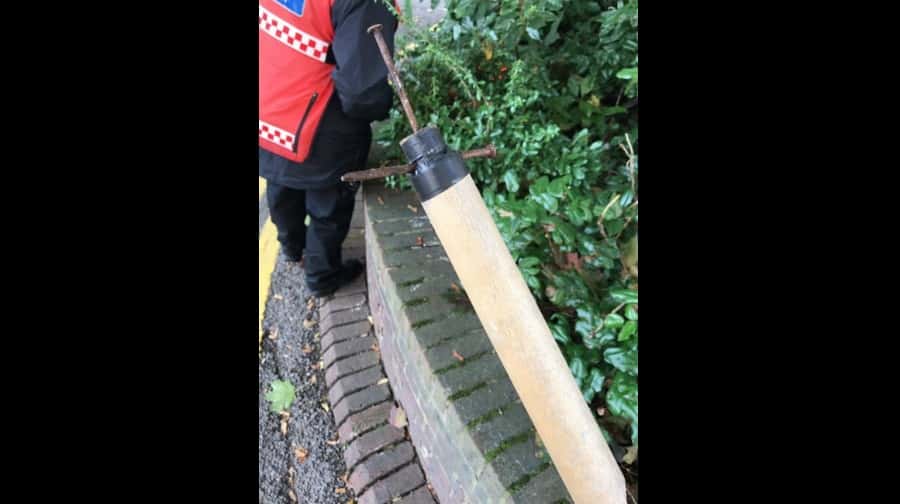 Police uncovered what they described as a mace as they conducted weapons searches across the borough last week.

The pole with huge nails sticking out of it was found on an estate in Peckham.

The latest wave of weapon sweeps going on across London formed Phase Six of Operation Sceptre. The five earlier phases, run since July 2015 across London, saw police carry out a total of 4,729 weapon sweeps, 155 searches of known knife carriers and 533 test purchase operations that resulted in 132 failures (illegal sales).

Sergeant Sweatman, who led Friday’s sweep in Peckham, said: “This week we found what I would call a mace – a nasty looking pole with nails sticking out of it. That was on the Friary Estate. On the Lettsom Estate in Camberwell we found an eight-inch blade.

“Anything we find is great because it reduces the risk again of a young lad being killed.

“Us being there and having a presence on the estates is also important because it helps us build up that trust. People stop and speak to us about their problems and we get all sorts of invaluable intelligence – which is what lets us know where to go and what to concentrate on fixing.

“Residents at the Lettsom Estate this week told us about a drug den and people they had seen using near their homes, and so we went back there and made some arrests.

“There’s a lot of intelligence that our dedicated ward officers now get from local residents that is vital to the police.”

A police weapons sweep on Friday was joined by London’s deputy mayor for crime and policing, Sophie Linden.

The Southwark officers strode beside council community wardens to scour the area along the canal walk – from Peckham Library to Burgess Park – as part of the Met’s Operation Sceptre.

DI Anderson said: “Youngsters need to be made aware that carrying a knife is not ‘normal behaviour’ and is against the law. A knife being present in any confrontation hugely increases the chance of fatal injury and often, people are injured by the knife that they, themselves were carrying.”

“In addition, new legislation now dictates that if someone is found to be carrying a knife more than once they will be going to prison.”

Operation Sceptre has so far seen over 250 people arrested across London in connection with knife-related crime, and the confiscation of 112 knives and 64 other offensive weapons.