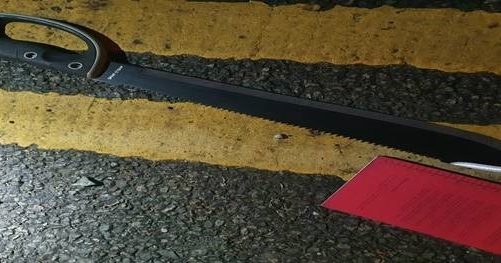 Cops seized a terrifying 40cm machete off the streets of Rotherhithe yesterday.

Officers in the Violent Crime Taskforce (VCTF) were on patrol in Silwood Street at around 5.20pm when two people on a moped noticed them and sped off.

The pillion passenger, who had his face covered, jumped off the moped and ran off. Cops chased the sixteen-year-old. They say they saw him throw a large knife away.

They arrested him and found the 40cm machete nearby. The 16-year-old boy was arrested on suspicion of possession of a pointed and bladed article and remains in police custody.

A hunt is ongoing to find the moped driver.

Inspector Paul Howlett said: “The fast-time reactions of the officers from the VCTF were instrumental in recovering this dangerous weapon and preventing it from causing destruction in our communities.

“We will ensure we provide the teenager with specialist support and diversion opportunities to prevent him from carrying a knife in the future.”