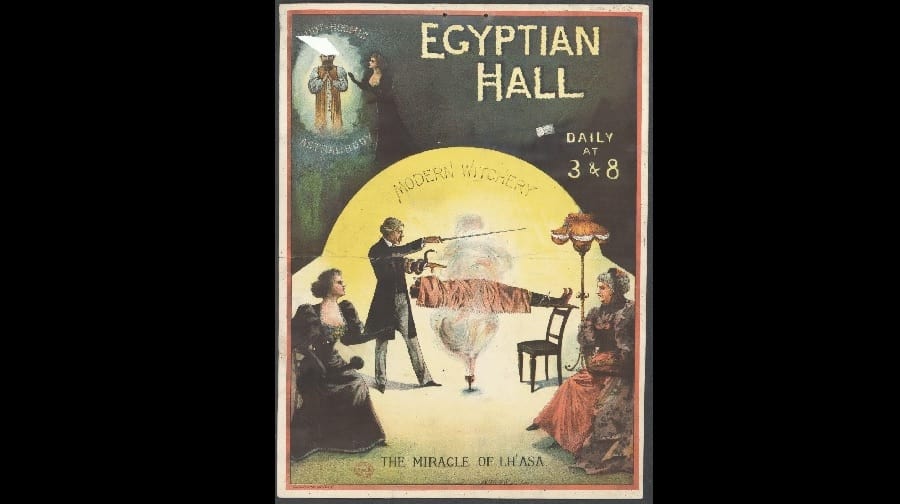 Highlights of a Victorian hoarder’s staggering 6000-strong collection of printed materials – from ticket stubs to bread adverts – is on show at the British Library now, writes Kirsty Purnell.

There Will Be Fun is an exhibition based on the  accumulated pile of nineteenth century materials collected by Kennington-born conjurer, illusionist and ventriloquist Henry Evans – known as Evanion.

Featuring materials from 1860-1895, the exhibition focuses on five pioneering performers of the time – big stage magician John Nevil Maskelyne; George Sanger, a circus performer who worked with animals ; hypnotist Annie De Montford, one of the first women to be a leading performer;  Dan Leno, who inspired the pantomime dame; and Evanion himself.

“What people will see here they’ll never have seen before,” said exhibition curator, Helen Peden. “These items weren’t meant to last… they were the type of material that was generally thrown away, but Evanion kept them all.”

Highlights of the exhibition include original posters and tickets, sound recordings and original magical artefacts, on loan from the Magic Circle Museum. The displays also reflect the revolutionary progress seen in colour printing at the end of the nineteenth century.

The British Library first got its hands on the Evanion Collection in 1895, when the performer’s failing health stopped him from working. He sold it for £20. “He knew that the items were the one thing he could make money from,” said Helen.

Evanion’s career as a conjuror spanned half a century, during which time he performed for audiences from workhouse inmates to the Prince and Princess of Wales.

Whereas Evanion’s link to entertainment-related memorabilia is clear, the link to the general materials he collected is less obvious. “I believe that he was a man who simply loved print,” said Helen. Evanion, according to Helen, was a man who who bore the gift of ‘natural humour’ and tended to ‘turn adversity into triumph’.

“Once, he had a gun on stage and forgot to put the safety on,” she said. “He handed it to someone in the audience who accidentally fired it – and he got shot in the hand”

A few weeks later, he fell over in a tube carriage – and landed on the hand he’d just been shot in.”

“He had his misfortunes but would always troop on.”