'It’s time to modernise, to force political parties to work collaboratively and to make sure your vote counts' 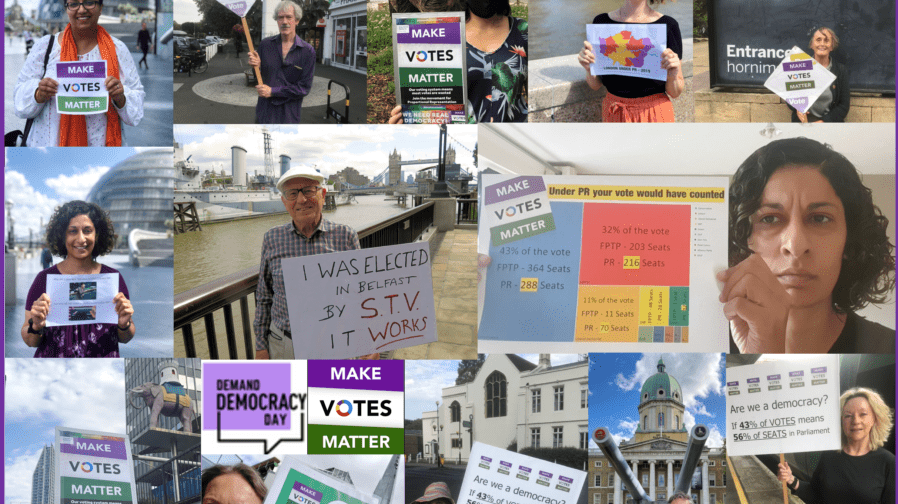 Voting reform campaigners staged a socially distanced demonstration at the weekend calling for the first past the post system to be overhauled.

Cross-party supporters of the Make Votes Matter campaign were out in force on Saturday, August 22, calling for proportional representation to be implemented in the UK.

Emma Knaggs, Grassroots Leader at Make Votes Matter, said: “Our first past the post voting system means parliament does not reflect how the UK voted.

“The government has a landslide majority of seats, but this is despite the Conservatives receiving less than 44 per cent of the votes.

“We need to change to a system of proportional representation so votes count equally, and so governments represent the diversity of people and views in our communities and society.

“It’s absolutely critical to people’s participation and faith in democracy.”

The Liberal Democrats have long campaigned for electoral reform even holding an unsuccessful ‘alternative vote’ referendum in 2011.  The Green Party also supports changing the system.

Southwark MPs Neil Coyle and Helen Hayes are supporters of reform, but the third local MP, Harriet Harman, has not  – so far – joined their ranks and publicly backed the Make Votes Matter Campaign.

One attendee, James, said: “Most people understand that first past the post is broken, it leaves tens of thousands of Southwark voters ignored at every election.

“Two of our three MPs in Southwark understand this and support PR, so our hope is that we and other PR supporters in Southwark can convince Harriet Harman to join us and her colleagues in calling for a fair voting system.”

Although first past the post elects the House of Commons, various forms of proportional representation have already been used in the UK including mayoral and European polls.

Lib Dem councillor Humaira Ali tweeted: “Millions of votes don’t count at election time, the system is biased against smaller parties and people vote tactically not for who they actually want.

“It’s time to modernise, to force political parties to work collaboratively and to make sure your vote counts.”