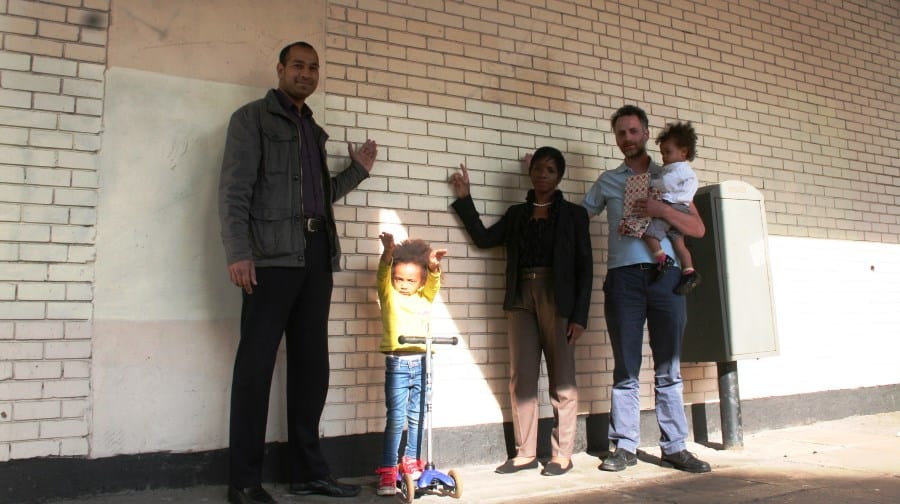 The community where Malorie Bantala lives has been ‘devastated’ by the ‘vile attack’ on her last week and has decided to create a ‘peace wall’ in support of the family.

In the spirit of the Peckham Peace Wall (inset right)?created after the riots in 2011, where thousands of people posted notes of love and respect, Malorie’s wall will collect messages of support for her family from the local community.

Joan Morris, chair of the Pelican Estate Tenants’ and Residents’ Association, is hoping to get the wall of Crane House, (pictured above)?which faces on to the crime scene in Talfourd Road, painted by local young people, before residents will be invited to post their messages on to it.

Ms Morris is keeping in contact with Malorie’s brothers and sisters, but is keen to create a place for the rest of the estate to offer their support.

“It’s just to show them that we are here for the family in solidarity,” said Joan, who is proud of the close-knit community of people from all backgrounds who “all get along” around the Pelican.

“We are like one big family here,” said Joan, who organises a slew of community activities each year.

Cllr Jamille Mohammed, who is assisting Joan in getting Malorie’s peace wall up and running, said: “The community is devastated by the incident and stand strong in solidarity with the victim and her family.

“I am shocked and offer my fullest sympathies,” he added.

Cllr Mohammed says the area around the Pelican Estate is “generally a very peaceful area” and that the brutal assault on Malorie last Monday evening, when two men in motorbike helmets pushed her to the ground and repeatedly kicked and stamped on her stomach, was an “isolated incident.”

MP for Camberwell and Peckham, Harriet Harman, said she was “shocked and appalled” to hear of the assault on her constituent in a “quiet community”, resulting in the tragic loss of her unborn child. “My thoughts are with her and her family,” she said.

One man was charged in connection with the incident and will appear at Woolwich Crown Court on July 2.

The Peckham Peace Wall after the riots in 2011

Investigation launched after Malorie waited over an hour for an ambulance