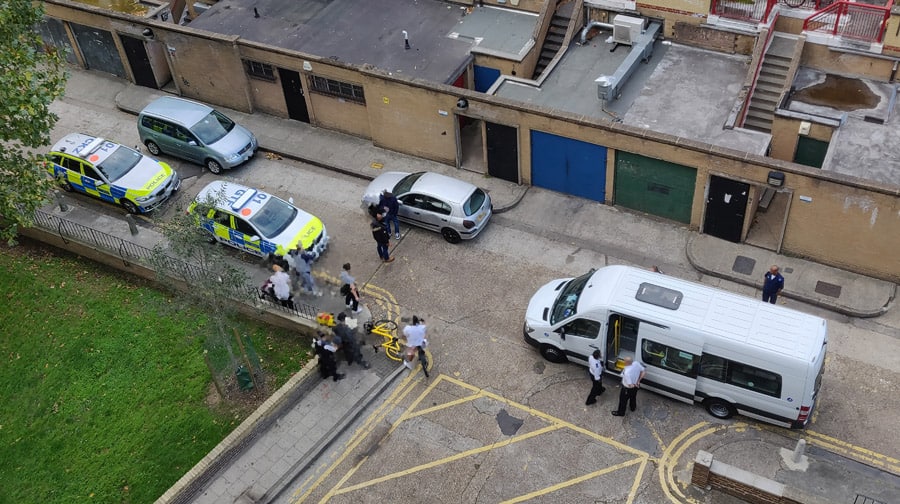 A man arrested after reports of him attacking the driver of a bus on a Walworth estate says he was trying to help after he heard an argument and kids crying.

The man, who wishes to remain anonymous, was arrested and cautioned with common assault after a heated altercation with a bus driver in front of crying children earlier this month.

Southwark Police said: “On Thursday, October 11, 2018, police were called to an allegation of an assault.

“A minibus driver in his 40s on Blackwood Street, SE17 was approached by the suspect who shouted verbal abuse at him.

“The suspect then punched the victim once through the driver’s window.”

Although it was alleged the suspect was carrying a screwdriver at the time of the assault, police have confirmed he did not threaten the driver with it and the screwdriver was not found upon his arrest. The victim was also not injured.

Southwark Police said: “Police attended and following an area search, located the suspect on Bronti Close, SE17, and arrested him.

“During the arrest a number of passers-by approached police and behaved in a hostile manner towards them.

“A 29 year-old male received a caution for common assault.”

One witness who saw events unfold told the News the children were “terrified, screaming and crying”.

However, others have come forward saying the passers-by were not ‘hostile’ to the police, and only stepped in to give their version of events, claiming the ‘punch’ was more of an ‘open-handed slap’.

The News has been told that it is believed the argument started after the mini-bus driver allegedly exchanged words with a female driver when both vehicles became jammed down the narrow backstreet.  Although this has not been confirmed by police.

Witnesses claim the man arrested by police initially stepped in to allegedly try and calm the situation down after realising the kids in the back were distressed.

But the intervention rapidly escalated into a confrontation, although a police spokesperson confirmed that no children were threatened or harmed during the incident.

The incident took place on the Nelson Estate, where one resident who witnessed some of the incident said they are constantly facing problems of anti-social behaviour and crime.

Although unrelated to this incident Ron Nielsen told  the News “I have lived in the area for ten years and on the Nelson for seven and although things have improved, with security doors added to half the estate, the remainder of the stairwells are still open and being used by addicts and prostitutes.

The former TRA chair says the block has always struggled to get the attention it deserves, compared to other higher-profile blocks in the Walworth area.

“And now, because of the ward boundary changes we have a new safer neighbourhood team and new councillors to build relations with,” he explained.

“Everybody just passes the buck”, he said. “At the end of the day, our young people and our pensioners suffer.”

The Nelson Estate, by East Street, was formerly in Faraday Ward but became part of North Walworth during last year’s boundary changes.

According to crime statistics released by the Met, the area tops Southwark’s wards for drug offences (208, compared with 159 in neighbouring Faraday), sexual offences (62, more than three times the number in Dulwich Hill and Goose Green), violence against the person (896) from August 2017-2018.

It also has the second highest number of common assaults within the same time period – 261.

As the News has highlighted, safer neighbourhood teams are increasingly under pressure during a merger between Southwark and Lambeth police, and an increasing number of critical, London-wide incidents meaning officers are being deployed to away from their neighbourhood work, leading to residents saying they are left policing their own estates, and call on the Met and Mayor to give more funding to bobbies on the beat.