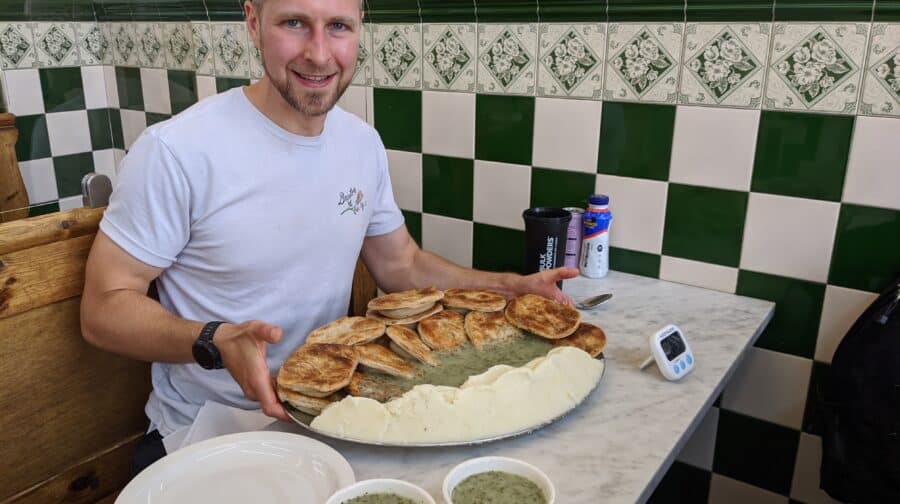 Max with his eighteen pies and seven lots of mash

Pie ‘n’ mash is a south London institution. But could you eat five kilos of pies in one sitting?

That’s exactly what Max Stanford did on Friday at Manze’s pie shop in Peckham, consuming a mammoth eighteen pies and seven mashes in just 43 minutes.

The 33-year-old, from Brixton, said he wanted to set himself the ‘man v food’ challenge at Manze’s, because it is the pie shop he always visited in childhood.

Max became interested in competitive eating late last year, and now competes in the British Eating League, where he is currently ranked as the second-best competitive eater. It took less than an hour to polish off the lot

The Peckham pie challenge is his biggest food conquest to date – and will help him prepare for an official competition with the league, where he is due to eat 100 Greggs sausage rolls.

“I just thought it would be quite a fun challenge to do,” said Max, who works in the charity sector. “They were really nice to me, I bought a platter of Amazon and then went for it. I ordered eighteen pies and seven mashes.

“Someone set up the British Eating League, but it’s mainly in the north, so I just thought it would be good to do a London one.”

Max first got into the competitive eating scene through going to the gym, as he had wanted to bulk up. Despite eating large quantities of food as a challenge, he says he wants to showcase that you can eat competitively but still lead a healthy lifestyle.

He also has no plans to become one of Britain’s few professional competitive eaters, saying it is a hobby alongside his work as an analyst for an early years’ charity. Max, left, wanted to do the challenge at Manze’s because he always visited as a kid

“I do it on the side of my job, it’s a hobby,” he told the News. “You can have these meals and still live a healthy life.

“I do lots of exercise and I kind of incorporate it in. Ideally, I’d love to be able to do it for charity.”

Other extreme meals Max has taken on include eating a 54-ounce burger in just twelve minutes, and nearly sixty Yorkshire Puddings in just three minutes.