The Rotherhithe Tunnel has since re-opened fully to traffic, says TfL 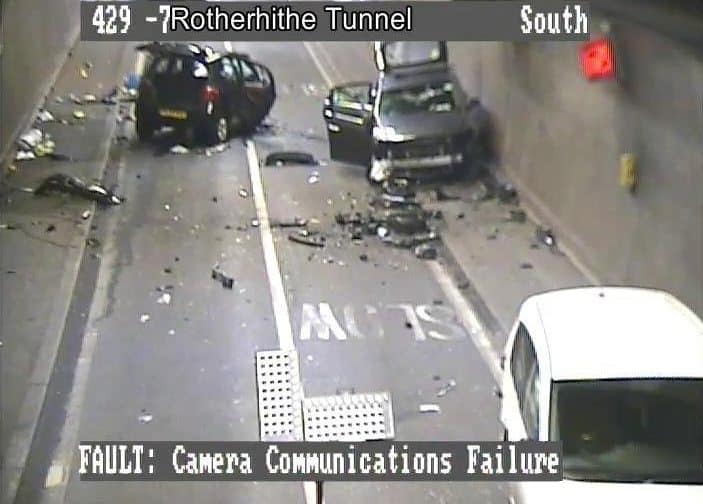 A picture released by TfL of the collision inside the Rotherhithe Tunnel (Image: TfL)

A man is fighting for his life this afternoon after being involved in a serious collision inside the Rotherhithe Tunnel at around 2am.

The serious collision, involving three cars, has left the man, thought to be in his thirties, in a “critical” condition, say police.

The tunnel was closed during morning rush hour while police and paramedics dealt with the scene, but it has since re-opened.

Pictures released by TfL show a horror scene, with debris from wrecked cars littered across the tunnel.

There were no reports of any other serious injuries, according to the Met.

The tunnel closure caused severe traffic delays around Jamaica Road and Lower Road, and motorists were advised to use other routes.

A spokesperson said: “Police were called at approximately 02:15hrs on Wednesday, 4 December to reports of a road traffic collision involving three cars in the Rotherhithe Tunnel, SE16.

“One man – believed aged in his 30s – has been taken to hospital for treatment to his injuries; he remains there in a critical condition.

“No reports of any other serious injuries.”

No arrests have been made, and police are still investigating the collision.

I don’t think that accident would be as bad if they had followed the 4 letter word written on the road in big letters.

It genuinely beggars belief that anyone could pick up enough speed in this tight tunnel to do that much damage, what the hell were they doing? There’s a speed limit and solid white lines in this tunnel FOR A REASON.

Do you think that one of the vehicles may have been going faster than the 20MPH speed limit?

Completely agree with you Michael. That tunnel is so narrow. It’s 20mph for a reason. I was 1 hour late for work that day.