Man finally meets his ’60s musical hero, after spotting him in the Southwark News

Those were the days when “you’d never pull a girl unless you were in a three-piece suit", and “there was always loads of girls there to see Francis” 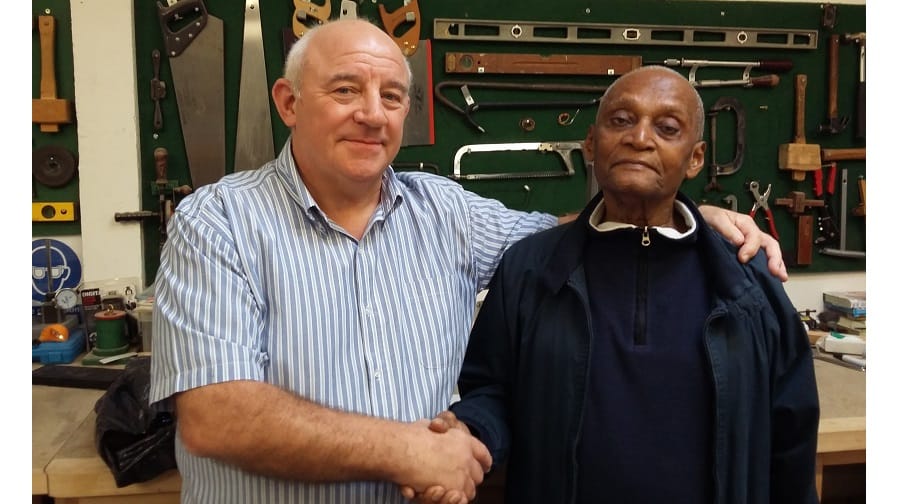 Back in the 1960s, it was just the gap between crowd and stage at old haunts like the Charlie Chaplin pub that kept these two men apart.

Fast forward to 2017, Charlie Jennett couldn’t believe his luck when he saw the aged but familiar face of his boyhood musical hero, Francis Campbell, looking at him from a page in the News.

Was it the same Francis from Francis and the Sapphires, whom Charlie danced, drank and sang to in his youth?

After a call to the News, Charlie couldn’t believe his luck, and a reunion was arranged on Friday for the two to reminisce about the songs and nights they loved.

Charlie, 67, from Waterloo, said: “When I was eighteen my mates and I would go to the Charlie Chaplin in Elephant and Castle on Fridays and Saturdays, and we’d see Francis and the Sapphires.

“They would do all my favourite songs of the time, and ever since those days I’ve always said to my wife – Francis could sing all of these songs better than the actual stars.” The band played a repertoire of classics by the Drifters, the Beatles, Ben E. King, and The Everly Brothers.

“When I saw him in the paper, I had to find out: is that the same Francis Campbell I was thinking of?”

Francis, 86, was in the News (September 28) in a story about the recently-burgled Men’s Shed club in Peckham, which offers a place for elderly and isolated men to socialise and do DIY.

“I lived in Clapham, and our band played all over London, three times a week for six years,” said Francis.

“One time we were in talks with [major record label] EMI. One time, we were in Hamburg and about to record an album, but it was the same time as the Brixton riots, and a couple of us had to go home because our families had been affected.

“It was a rail road [the music industry], and you could get slapped off without doing anything wrong.”

Those were the days when “you’d never pull a girl unless you were in a three-piece suit”, and Charlie remembered “there was always loads of girls there to see Francis”.

“This has made my day, it really has,” said Charlie. “Music is a beautiful thing. Truly wonderful,” said Francis.