Man in a wheelchair was in collision with lorry 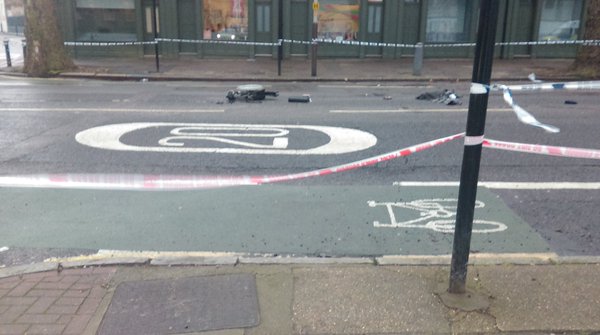 A man in a wheelchair was seriously injured in a collision with a lorry this morning in Borough Road.

London’s Air Ambulance was called to the scene near St George’s Circus just after 8am and the disabled man was treated at the scene for a head injury.

He was rushed to King’s College Hospital as a priority and a police spokesperson confirmed his injuries were “serious.”

Borough Road was closed in both directions as police investigated the incident.

No arrests had been made as the News went to press.

Look at the state of the dropped kerb and carriageway in your picture, although context is unclear. with such poor flatness profile (dropped kerb should be flush with carriageway or a maximum of +6mm, and gradient to footway level 1:20) if there is too big a step at the kerb and too steep a gradient up to footway level than a wheelchair user, even in a powered chair can be trapped on the carriageway and have to travel with the motor traffic in search of a place to get back on to the footway.

The issue is also aggravated by drivers parking across dropped kerbs and on crossing zig zag lines. Perhaps a time for Southwark News to invite readers pictures of dangerous and substandard dropped kerbs (the CTC Fillthathole app is a useful way to report this), and picture of vehicles blocking dropped kerbs. I believe a picture of the vehicle showing its registration number is sufficient to get a prosecution for obstruction (s.137 HA 1980), but this cannot be an action by the borough parking attendants. Remember too that frioving and parking an HGV on the footway (causing the damage that you see to the kerbs and pavement) can also be prosecuted (s.19 RTA 1988). Driving down this behaviour should make it easier to cross the road for those using wheelchairs and others challenged by the damaged and obstructed access and step up at the kerb where that access is blocked.

Southwark NewsNewsMan in a wheelchair was in collision with lorry