Man in his 20s dies from gunshot wound in Sydenham

Witnesses have said the bullet may have killed the man who fired it, possibly after it ricocheted from a car. 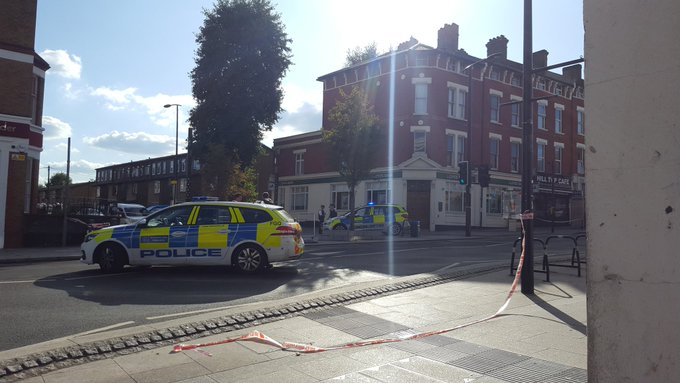 Police at the scene on Sydenham Road. Credit: Andrew Chang

A man died on Sydenham Road yesterday afternoon after a shooting in broad daylight.

Police were called to the busy street at 3.45pm on Sunday, September 8, after reports of “suspicious activity”.

They heard shots fired and found a 25-year-old man with gunshot wounds.

He was treated at the scene by paramedics but died minutes later.

Witnesses have said the bullet may have killed the man who fired it, possibly after it ricocheted from a car.

Detective Chief Inspector Richard Leonard said: “We are still in the early stages of the investigation and our enquiries into how the man came to be fatally injured continue.

“However, one hypothesis is that the man unintentionally discharged a firearm resulting in his fatal injury.”

One man has been arrested in connection with the investigation and remains in custody at a south London police station.

Next of kin have been informed but he is yet to be formally identified.

Police say no one else was injured during the incident.

Anyone with information about the incident is asked to call police 101 quoting CAD 4860/8Sept or the independent charity Crimestoppers on 0800 555 111. They do not ask your name and cannot trace your call or I.P address.

Southwark NewsNewsMan in his 20s dies from gunshot wound in Sydenham