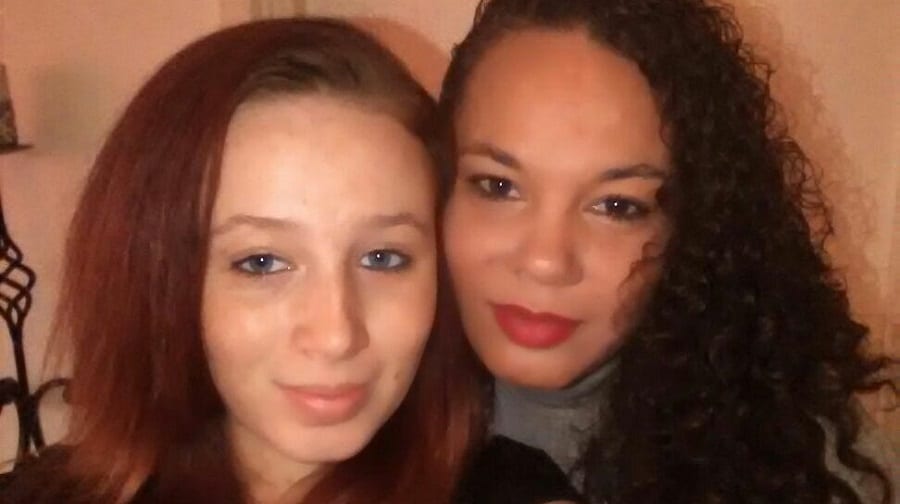 Sabrina Mullings (right) with her daughter Hayleigh. Sabrina was stabbed to death by her fiance Ivan Griffin who was later found by police in Southwark.

A man who stabbed his fiancée to death just hours after celebrating their engagement has been jailed for life.

Ivan Griffin, 24, was sentenced to a minimum of sixteen and a half years in prison on Tuesday for the murder of Sabrina Mullings.

The Old Bailey heard how Griffin murdered his 38-year-old fiancée in the early hours of March 13 at the Croydon home they shared.

He spent the hours after the murder wandering around the streets semi-naked and was seen walking into traffic in Camberwell before being picked up by police in New Kent Road.

The pair had been in a relationship for just four months after meeting while neighbours in the same residential block, the court heard.

Footage shown to the court revealed that just hours earlier on the evening of March 12 Griffin and Sabrina had danced together at an impromptu celebration of their engagement.

The video was captured on the mobile phone of the victim’s daughter Hayleigh, 22, who together with her boyfriend Chaise Gore shared the flat.

However, just hours after Hayleigh and Chaise had said goodnight to the couple, leaving them in the living room where they slept, they were disturbed by the pair.

They were woken at 5.30am by the sounds of Griffin shouting and banging, with crashing noises coming from within the living room.

Both Hayleigh and her boyfriend desperately tried to reach Sabrina to help her, banging on the living room door and shouting to Griffin, but he had barricaded the door shut.

Although they were unable to see what was happening in the room, they said they could clearly hear Griffin making comments about “devil worship” and “having to cleanse her [Sabrina’s] soul”.

Hayleigh and Chaise retreated to their bedroom until Griffin opened the living room door and made his way into their room.

Griffin was fully dressed but lifted up his upper clothing to reveal stab wounds to his chest and abdomen that he said he had caused to himself.

He apologised to them both before leaving the flat.

Chaise attempted to administer first aid and an ambulance was called, followed by police, but paramedics were unable to save Sabrina and she was pronounced dead at the scene.

A post-mortem examination gave the cause of death as stab wounds to the abdomen and chest.

Griffin did not offer any explanation for his actions during police interviews.

Sabrina’s mother, Marian Mullings, said in a victim impact statement: “Sabrina has always been a very creative person, with a great imagination, and she was very artistic. Wherever she lived she took pride in her home.

“She was a warm and loving person and very much wore her heart on her sleeve.

“The loss and trauma of her death have been immense. Not only did Hayleigh and Chaise have to go through the ordeal of what they saw and heard the morning she was killed, but they had to leave the house as it became a crime scene and [ultimately] lost their right to remain there as the property was in Sabrina’s name.

“Hayleigh has had trouble sleeping at all ever since. She says she keeps seeing everything that took place.

“We are going to have to live with this forever.

“All we have now are our memories, we cannot understand how Ivan could claim to love her, get engaged to her, then only a few hours later stab her with a knife and leave her alone and in pain to die and her own daughter to deal with the situation. Our lives will never be the same without Sabrina.”

Detective Chief Inspector Will Reynolds said after the sentencing: “Griffin callously and viciously attacked a vulnerable, trusting woman that he purported to love and had asked to marry him.

“He subjected her daughter, Hayleigh, and her boyfriend to the terrible ordeal of hearing the attack on Sabrina but being prevented from helping her, and then callously fled the scene. Her death has left the family utterly devastated.

“I am pleased that the jury did not accept the argument put forward of diminished responsibility and have rightly found Griffin fully accountable for his appalling actions of that terrible night on which Sabrina lost her life.”