The trio have raised more than £5,000 for charity after lapping the park nearly 500 times 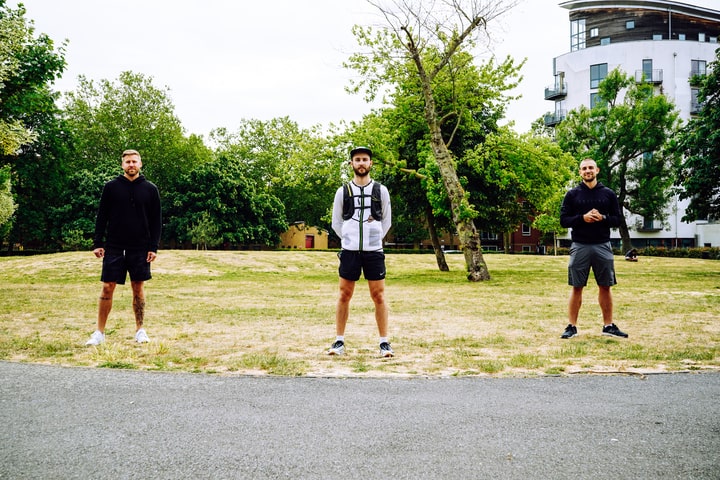 The trio of friends, Will, Max and Matt signed themselves up to run 100 miles in less than 24 hours

An Elephant and Castle man ran a gruelling 100 miles in under 24 hours in a Bermondsey park last weekend for a social mobility charity.

Friends Will Howe, Max Cotton and Mat Hobbs signed themselves up to run nearly 500 full laps of Bermondsey Spa Gardens from 5pm on Saturday for Football Beyond Borders – the equivalent of almost four marathons in one go.

All money raised is going towards Football Beyond Borders, an education charity working with disadvantaged youth.

Will, a creative director who also ‘climbed’ Everest on his flat stairs during lockdown, managed the full 100 miles, and pals Max and Matt fell just short of the target after becoming injured.

The trio have raised £5,000 for Football Beyond Borders. “Our predictions were way off,” said Max, a 31-year-old personal trainer from Bermondsey.

“I aimed for twenty hours, I thought it would be enough, but I think I went with that because my mind couldn’t comprehend being out longer than that. “I ended up going to sleep on the pavement, I was shivering. I was really disappointed, this was about 21 hours in, I only had thirteen miles to go. It’s disappointing but I will do a 100-miler at some point – but I’m never running another mile in Bermondsey Spa Gardens!”

While Max was resting up in bed from the draining ultra-marathon, pal Will was forced to go to hospital with stress fractures after powering on in agony through the race.

Football Beyond Borders, the charity for which the three men were running, uses football to provide inspiration for disadvantaged youngsters in Southwark and further afield.

The charity will be using the money to run a ‘virtual school’, which it has been running from 10.30am to 4pm on platforms such as TikTok to make sure disadvantaged kids don’t fall behind in schooling during lockdown.