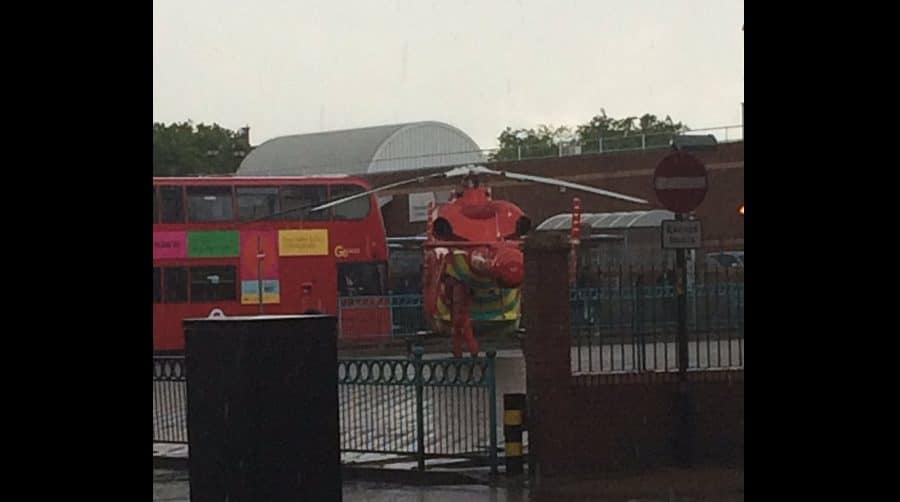 An Air ambulance landed at the Peckham High Street bus garage to assist following a stabbing incident. Photo by @mystiquetrish

A 36-year-old was stabbed at the Aylesham Shopping Centre in Rye Lane during an attempted robbery on July 13.

The incident took place at about 4.40pm, after the victim went to withdraw cash from a bank in Rye Lane.

Inspector Kelvin Robins, who attended the incident, said: “Initial investigations suggests that the victim had withdrawn money from a nearby bank and had just returned to his car when he was attacked.

“The attacker fled with the money and left in a vehicle, believed to be a Volvo.”

The News learnt on Monday that the victim was in a stable condition and shortly due to be discharged from hospital.

“[The victim’s] injuries don’t appear life threatening,” Inspector Robins said. “But, as with any knife injury, a matter of millimetres difference could have deadly consequences.”

A London Air Ambulance landed at the bus garage in Peckham High Street to take the victim to hospital.

Police have yet to make an arrest but enquiries are ongoing.

Inspector Robins added: “Did you witness the incident? Did you see a Volvo being driven away erratically? Please call 101 quoting CAD 6607 of the July 13: or Crimestoppers anonymously.”

Injuries don't appear life threatening. But, as with any knife injury, a matter of millimetres difference could have deadly consequences