Man trapped in rubble after chimney collapses in Camberwell 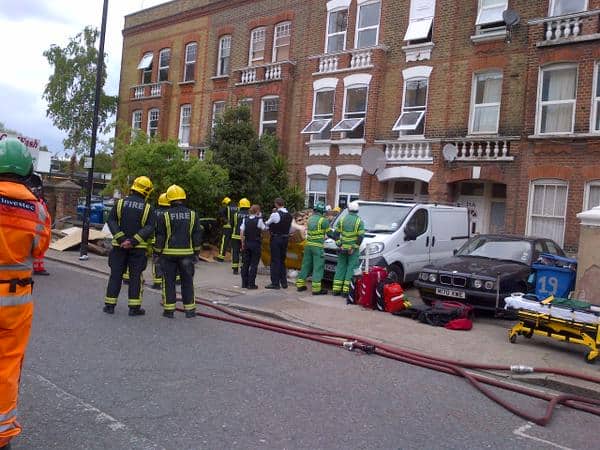 The scene in Southampton way. Pic courtesy of the London Fire Brigade

A man was trapped in the rubble after a chimney collapsed this afternoon in Camberwell.

Firefighters attended the scene in Southampton Way just before 2pm and freed the injured man.

He was taken to King’s College hospital by the London Ambulance Service with a head injury.

A second man was also taken to King’s as a priority with leg and hip injuries, escorted by the doctor from London’s Air Ambulance. A woman was treated for minor wrist injuries at the scene and also taken to hospital.

Station Manager Bruce Grain, who was at the scene, said: ”Firefighters worked in difficult conditions to safely rescue the casualty from the rubble.

“The Urban Search And Rescue (USAR) team stabilised the property and used line rescue inside the building to remove larger pieces of rubble enabling them to free the man.”

A 25m hazard zone was temporarily put in place as fire crews remained at the scene this afternoon.

The cause of the collapse is not known at this stage.

Southwark NewsNewsMan trapped in rubble after chimney collapses in Camberwell