Josh Quigley, 26, credits the bike with helping him overcome severe depression - but it was stolen as he was staying at a hostel on Borough High Street 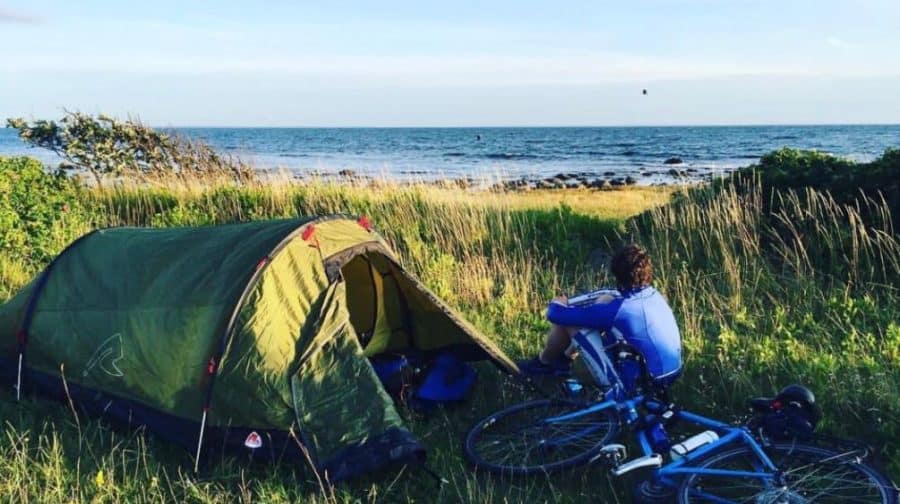 A man who is attempting to cycle around the world has been delivered a serious setback after his bike was stolen on Borough High Street.

Josh Quigley had been staying at the St Christopher’s hostel when his “priceless” bike was stolen from a rack outside the nearby Sainsbury’s on Easter Sunday. He had not been allowed to keep the bike inside the hostel.

The cyclist, originally from Edinburgh, had been enjoying a day’s break in his sixth attempt to cycle around the world, visiting 60 countries and six continents.

However, after he publicised the news of his bike’s theft, kind-hearted fans and strangers rallied around – and have raised £2,500 for a new bike to carry him on the first leg of his worldwide journey. Josh pictured with his bike, Braveheart which was stolen outside the Sainsbury’s on Borough High St

He told the News: “The bike was priceless. That bike put me on such an amazing journey when I was in a bad place.

“If a few days before the bike was stolen someone had offered me a million quid for it, I would not have sold it.”

The 26-year-old credits cycling with saving him from dark times after falling into depression in 2015 – and surviving a suicide bid.

The bike – named ‘Braveheart – also helped him deal with the death of his father, who passed away from leukaemia last year.

However, the cyclist does not hold a grudge against the person who took the bike, telling the News that he hopes it brings them as much happiness as it has brought him. Josh pictured with the bike during one of his previous travels (Image: Josh Quigley)

“I wouldn’t say anything to them,” Josh said. “I would just ask them if they were OK. You have to be in a desperate position to steal a bike.”

The thief will also not thwart his sixth attempt to travel the globe, he said.

“It’s such a big scary thing. At the end of the day it’s just me and the road,” he told the News – but this time he is determined to overcome the fear and finish the trip.

If you would like to follow Josh’s adventures on his around the world bike tour – expected to last three years – he posts a daily video blog on his social media @JoshQuigley92.