'We need to move forward to survive' 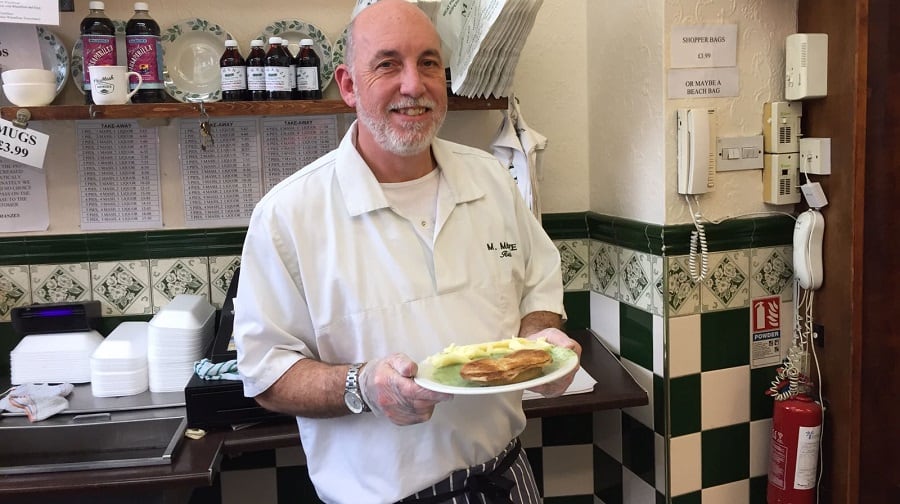 Rick Poole, one of the owners of Manze's Pie and Mash

Bermondsey’s much-loved historic pie and mash shop is urging customers to get behind it as it fights to survive the gentrification of the borough.

Rick Poole, co-owner of Southwark’s Manze’s Pie and Mash stores, says the chain’s popular Tower Bridge Road branch is under threat as it struggles to keep up with the ever-changing times.

The 53-year-old, who co-owns the chain with his brothers Geoff and Graham, recently pulled out of a contract with delivery company UberEATS after it sparked backlash from some of their customers.

And he is now calling for customers to get behind the company, as they fight to survive the gentrification of Southwark.

Speaking to the News, he said: “Because of the Uber connection, a lot of customers were upset because it was stealing trade from the black cab drivers.

“We are always getting calls from office workers asking if we deliver and we had all of the UberEATS packaging ready to go – but we have to listen to our customers.”

Rick said he did contact Deliveroo, who also deliver in the area, but was told that they are not taking on any more customers at present.

The businessman told the News it is “not a case that the branch is shutting down” but that the delivery service was something that would have helped it to survive.

“There’s always the threat [of closure] because over the years so many things have changed for us in Tower Bridge Road,” said Rick.

“One of those things was the red route [which imposes parking and stopping restrictions on certain roads].

“You can drive up to the shop and not be in the red route – but as soon as you drive off you would be in it.

“Then they did away with any parking round the back of the shop, so we have to rely on people turning up in taxis or on foot. The parking is terrible.

“They also did away with the market stalls, which were always a help to the shop. Pie and mash shops have always been near markets and so that was another nail in the coffin. The whole area is changing; it’s getting quite gentrified and we need to find ways to keep going.”

Rick said he had not ruled out the idea of using a delivery service and would look to do so again in the future.

But until then, the business must find a way of reaching more people and needs to “move forward to survive”, he said.

“We need to evolve in ways but not so much so that it detracts from what the business is all about and how it has been for the last 100 years,” he said. “If I can reach more people then that would be a good thing.”

Manze’s boast their own delivery service to the entire UK. Visit their website for details.

Over 100 years of history

Manze’s started life in working class London back in Victorian times when eels were netted from the Thames and pastry was rolled by wives on their doorsteps.

The first Manze’s pie and mash in the area was formerly a Cooke’s Pie & Mash in Tower Bridge around 1891/92, owned by great grandfather-in-law, Robert Cooke.

The original ‘Manze’ brand belonged to Rick’s grandfather Michele Mansi, who immigrated to London from Italy.

According to Rick’s brother Geoff, the famous Manze name is in fact the incorrect spelling of their original family name.

The turning point in Michele’s life came when he “hitched up” with Robert Cooke’s daughter. The business inherited his name in 1902 after he took it over from his father-in-law.

At one stage the Manze’s empire included fourteen shops across south east London.

Taking custom from black cabs by offering a better service at a lower price isn’t stealing.

I miss your P&M, up here in Peterborough – Wisbech – March there are so many exiled Cockneys. We would welcome you here. In Boston there is a take away doing P&M. We are yet to sample their fare. But tried that Cooks from the supermarket, sorry it’s not Manzes. I can park in the Red Zone, but the mayor now wants to ban diesels. Time to turn again ? 120 miles for a meal, has got to be worth it.

A better service? How so? and the only reason they’re sometimes cheaper is because they’re subsidised by huge corporations like Goldman Sachs. Look at all the crashes, rape and sexual assault charges brought on Uber drivers in the last few years. You don’t have a clue!

Yes, a better service. They have far better availability than black cabs.

The “subsidies” you talk about are paying to expand the business. You might as well call a cabby taking a loan from a bank to buy a car a subsidy from a huge corporation. Uber is actually profitable in the UK.

I’ll look at all the crashes, rape and sexual assault charges for London Uber drivers if you provide a list. However, in the interests of fairness you should provide that list for all cab drivers in London.

No they don’t LOL, use any app like Gett or Hailo and it’s exactly the same, and the bonus is that you get a fully qualified and insured driver! In the interests of fairness I’m glad to report there have been 0 sexual assaults and rapes by black taxi drivers since your beloved Uber arrived!

Tried Gett and Hailo. Generally takes far longer for either to get a car to my home than Uber do. Same applies to most places I tried outside the city centre. I check the competition every few months to see if they’ve improved, and they *are* improving, but Uber still has far better availability.

Our gauges on quality must be completely different then, I guess you’re a spam sandwich kind of man rather than a fillet steak. 🙂

Always packed (and really tasty !) when I go to Manzes – when is this mythical “down time”?

Only open for 4 hours a day, could look at extending his hours to cater for a wide trade. Sure it would be worth it.