'We've been here for nearly 120 years - and hopefully we'll be here for another 120,' says Manzes director 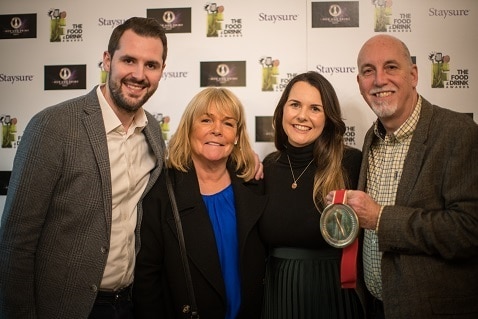 Tom, Emma and father Rick with Linda Robson. The Food and Drink Awards

The family business, which has a flagship outlet on Bermondsey’s Tower Bridge Road, has passed down through four generations of family – and has now been recognized a Heritage award in the first-ever Food and Drink awards.

“It’s a great result to be recognized and understood as a business that has been here for nearly 120 years,” said director Tom Harrington.

“And hopefully it’s going to be there for another 120 years.”

The business was first founded in 1902 by Michele Manze in Bermondsey, and has been serving pie, mash and liquor for more than a century.

Michele’s grandson, Rick, is still involved in the business alongside his daughter Emma and her husband Tom.

Since the awards were announced on TV on Sunday night, the business has been inundated with messages – with even its website going down due to visitors.

But the business, which also has outlets in Peckham and Sutton, has had to keep the secret since Christmas, as this is when filming took place.

“We got nominated based on our history,” explained Tom. “I don’t know if it was one of our regulars, but then they [ITV] came in and did a mystery shop.

“They came in just before Christmas and they tried the food and spoke to the staff, and then they let us know we’d won one of the awards.

“It’s an exciting thing to have, some people were aware but it’s nice that everyone can be aware of it now.”