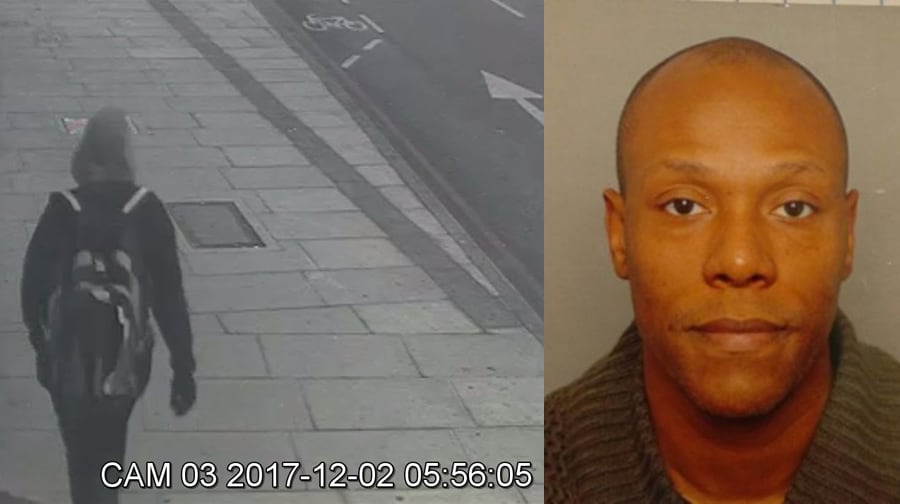 It was a murder case which instantly baffled and shocked even top murder cops at Scotland Yard.

Murdered Noel Brown, 69, a convicted sex offender, was found dismembered in the bath at his home in Deptford.

His daughter, Marie, a single mother-of-two from Peckham, had been throttled to death in the flat’s living room.

There was no break-in; no immediate motive; no clear indication who the killer was.

Here, for the first time and in extraordinary detail, is the full story of how top murder cops at the Met solved the December 2017 double murder case – which they describe as one of the most challenging they have ever seen.

READ MORE: ‘Act of Retribution’: Police reveal their theory behind murder of Marie and Noel Brown The flat, one of a block of four in New Butt Lane, is surrounded by busy Deptford High Street.

There are cameras all over the place.

“But this was the one CCTV camera in the entire estate that did not work,” revealed DCI Simon Harding.

The sheer number of cameras, plus the number of people walking around the nearby high street, meant officers needed some way of narrowing down the time period of footage they needed to look for over the four-day period.

Detectives described Noel as “security conscious” and a “creature of habit” and there had been no sign of forced entry into his flat. The killer must have got in without a struggle.

The flats were accessed using key fobs, and the times and data of which fobs entered the building were logged.

A fob believed to have been taken from Noel was being used when detectives believe he was dead, giving timings to look for on CCTV.

But after contacting the fob company multiple times, it was revealed the clocks on the fobs had not been reset to the correct time – meaning cops had been out by an hour in their CCTV inquiries.

Armed with the correct timings, cops eventually landed on a picture of man whose movements matched the fob records of failed entries to the block.

This, believed to be Henry, shows a man walking along a road at around 5am on Saturday, December 2 with a large rucksack on his back.

Officers dub the suspect ‘Rucksack Man’. This footage was released to the public in an appeal. Another man is thrown up on CCTV on December 1, 2017 – whom officers call Bike Man

Further trawling of hours upon hours of CCTV – the search extends to nearly three miles in the end, well above normal policing procedures – also throws up another person of interest.

On Friday, December 1, cops notice a man on a silver bike entering the estate at around 10.30am, which would place him in the vicinity of the murder at the time Noel was murdered.

He is spotted again on CCTV nearly two miles away in Grinstead Road, seemingly on his way to the scene. As police could not be sure he is the same person as ‘Rucksack man’, he is dubbed ‘Bike Man’.

Painstakingly detectives began to piece together the pieces of CCTV footage to build up an idea of the suspect’s movements, and to reveal that Rucksack Man and Bike Man were one and the same.

Four visits to the scene by the suspect were logged on CCTV.

Bike Man is seen entering the estate on Friday morning, and leaves an hour later – seemingly having killed Noel Brown.

The second time he is seen, as ‘Rucksack Man’, is in the early hours of Saturday morning.

He does not get into the flat this time – for the keys he has taken from Noel do not actually belong to Noel, but his neighbour, Jennifer Hilton.

The killer returns shortly before noon on Saturday, to saw up Noel’s body. It’s not clear still how he gained entry.

Shortly after noon on Saturday, December 2, Marie visits her father’s flat to check up on him. She is strangled by the killer.

Bike Man leaves the scene at around 1pm, having killed Marie. A fourth, and final, visit is captured on CCTV that evening. He does not stay long and detectives do not know why he returned.

Officers then had a clear idea of the killer’s movements – but still had no idea who he was, or why he carried out the crimes.

‘We have found him boss’ – HOW DNA Technique snared killer By early spring, hundreds of exhibits submitted by murder cops for testing were returned.

DNA uncovered on either end of the tubigrip, thought to be the murder weapon, matched the DNA of a suspect in a burglary in Hounslow, West London in 2011.

But that burglary had never been solved, and no name could be matched to the DNA.

Top murder cops turned instead to familial DNA matches – in which similar profiles are scoured on the database on the possibility they may be a direct relative of the offender.

Detectives stumbled upon a woman in Birmingham, whose print on the National DNA database had a high relative similarity with the ones of Unknown Seven.

Police told her that they were investigating a double murder in Deptford, over 130 miles away. There was, they said, the potential that a relative of hers was in some way involved.

Their excitement at a potential break-through in the case was heightened only when the woman in question revealed that her father used to live in Deptford.

But, as had happened before in the investigation, this turned out to be a red herring. A sock bandage, worn by Noel for his infected legs, is thought to have used by the killer to throttle him to death

It was a complete coincidence that her father had happened to live in the area where officers were investigating a brutal double murder – for DNA tests proved she was not related to the killer.

From their CCTV footage, cops knew they were looking for someone either old enough to be the father of their suspect aged between thirty and fifty, or young enough to be his child.

Developed by the National Crime Agency, the technique is cutting edge and rare.

The lists of partial matches are further narrowed down by geography and age, so that only those with a link to the area where the crime happened are prioritised.

It has only been used in around 250 investigations in the UK, the majority of which are homicide cases, explained the National Crime Agency’s Lee Rainbow.

Of those, about sixty have successfully led to a match for the offender. The Deptford double murder will now join that rank of cases.

With age and location as factors, the DNA list was re-prioritised, and detectives rang the first entry on it.

This, it transpired, was Nathaniel Henry’s father. “Is this about my son?” he asked detectives. Nathaniel had been found dead in a locked electricals cupboard in Peckham of a drugs overdose on New Year’s Eve.

DCIs Rance and Harding were in the pub celebrating a suspect in a ‘harrowing case” pleading guilty when the call came through.

“I got a call from one of my officers,” DCI Rance told reporters. “He said, ‘We’ve found him boss.’” She surreptitiously mouthed the news over to DCI Harding across the busy table.

Henry had been on the list of five hundred names at the beginning of the investigation – people in some way connected to Noel Brown, his past crimes, or his daughter, Marie.

A preliminary background check had been conducted, which did not turn up much especially of note.

But given the sheer number of names on the list, it was not re-done after he went missing, or after he was found dead. Nathaniel Henry was found dead in a locked cupboard only weeks later – but why would he have killed when he apparently did?

Why would Henry have decided to murder when he supposedly did?

Although a “well-known” figure on the estate who was “friendly”, Noel Brown had a string of twelve convictions for serious offences including rape, sexual assault and burglary. He had been a registered sex offender.

But Mr Brown had been released from prison in 2004 for his last crimes, and had been assessed by probation authorities as ‘low-risk’.

There had been a long period of sixteen years where there had been no offences at all in the string which he committed.

He had been living in the community without incident for over a decade, and any offence for which Henry is thought to have killed him for would have taken place years previously.

“I’ve no idea what the trigger was, all those years later,” admitted DCI Harding. “We don’t know.”

“We never worked out how he got into the building on the first time,” he added, speculating that he could have pretended to be a gas-man, or walked in behind someone else.

No evidence of foreplaning was discovered by officers either. Officers are in the dark, too, over what happened to Mr Brown’s hacked-off leg and arm parts.

Lakes were searched, bins scoured, a helicopter was even enlisted to look over nearby rooftops – but they were never found.

Only one aspect of the inquiry remains live: Henry’s phone, which could provide clues about the timing and planning of the murders. Yet DCI Rance has warned: “It may never be unlocked.” The mystery of ‘why then?’ may never be solved. The pain and hurt at having lost two of their relatives in such a horrific way has only been deepened by the impossibility of a criminal trial, say the Brown family.

“This devastating loss has robbed us of his presence unfairly, made worse by the knowledge that no one is being brought to justice for this crime,” said Noel’s daughter, Sharon.

“For the last two years, we have experienced acute shock, severe anxiety and depression, struggling to carry on with our lives when nothing will ever be the same again.”

“As a family we have really struggled to come to terms with the death of our lovely Marie,” added Marie’s daughter Vanita, and sister, Cassandra.

“It has been nearly two years since she was taken from us and we are still in pain.”

Part of the reason, say top cops, for the unprecedented openness about the murder hunt is to provide some closure to the family who have lost two of their loved ones. DCI Rance told this paper: “Unfortunately they have not had the closure they would have had in a criminal trial.

“It’s fair to say that there have been disappointments. The police and the family would always like to question the person why they did it.

“But we don’t have that chance.”

Henry may have taken his drugs overdose in guilt over Marie’s murder, after discovering she was a single mother-of-two, added Rance.

An inquest last month heard how he sent a text to a friend on the night of his death, the day after Marie and Noel’s bodies were discovered, saying: “I’m going to be missing this week. I’m not my usual self.”

“We would now like to privately mourn the loss of Marie and continue with our lives,” said Vanita Brown, who was only a teenager when the murders happened.

“There are many things that we have started that Marie would have been so proud of and we intend to finish them.”