The Brown family have paid emotional tributes to their deceased relatives, as murder cops describe the case as one of most challenging they've ever seen 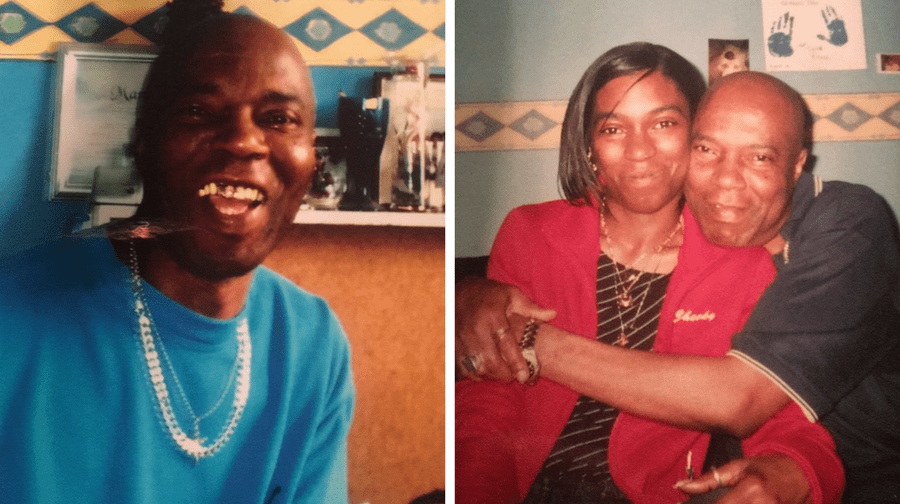 The gruesome murder of Noel Brown was a revenge killing for one of his previous 33 offences, which include serious sexual offences, burglaries and thefts, cops today said.

Mr Brown, a 69-year-old registered sex offender, had been throttled to death with his own sock bandage at his flat in Deptford’s New Butt Lane in December 2017 – and his mutilated corpse was missing one of his legs and parts of both arms.

The missing parts have never been found.

His daughter, 41-year-old single mother-of-two Marie Brown from Peckham, was killed after she went to check on him on December 2, 2017.

She too was throttled to death by the murderer using her father’s second sock bandage, said police. Officers believe the killer  may have been been in the process of sawing up Noel’s body, when disturbed by Marie.

In an extraordinarily candid briefing this afternoon, top murder cops at Scotland Yard told the News it was one of the most challenging homicide investigations they had ever seen.

They believe that 37-year-old Peckham youth worker, Nathaniel Henry, was the culprit responsible for strangling both Noel and Marie, and also sawing off parts of Noel’s limbs in the flat’s bathroom.

Henry has never stood trial for the horrific crimes – because only a day after the bodies were discovered on December 4, he took a fatal drugs overdose in a locked electricals cupboard at his block of flats in Peckham Grove.

But DCI Helen Rance, one of the lead detectives on the case, told the News: “I’m one hundred per cent certain he did it. There is no doubt in my mind at all.”

Mystery still surrounds why Henry, a basketball coach at Peckham’s Damilola Taylor centre, would commit the crimes when he supposedly did.

A final piece of the jigsaw may be his phone; yet despite their best efforts police have still not cracked its contents.

“It could reveal the mystery of why he did it [when he did],” added DCI Rance. “But it could take many years, it could never be unlocked.” Detectives detailed the many twists-and-turns of their urgent probe to find the killer.

The estate, just off Deptford High Street, is surrounded by local authority cameras – and detectives quickly realised that one of them looked directly over the door-step of Noel’s one-bed flat.

But in bitter twist-of-fate, the camera that would have best identified the killer was the only one which did not work on the estate.

“We located the footage as quickly as we could, and downloaded it back in the office,” DCI Simon Harding told reporters.

“But this was the one CCTV camera in the entire estate that did not work.”

At the beginning, police did not know how many offenders there were, or what the motive for the double killing was.

A vital clue came when DNA uncovered by detectives on either end of the murder weapon matched the print that was uncovered at the scene of a burglary in Hounslow, west London, in 2011.

But despite the match, police were no closer to finding their double murderer: for when they rushed to Hounslow they found that crime had never been solved.

Local officers did not even especially remember the case, DCI Rance said.

Now the DNA hunt was on to find the unidentified man who had been involved in both the 2011 burglary and the gruesome double murder – whom officers called ‘Unknown 7’.

Using a technique known as familial DNA searches, officers turned to the National Crime Agency to help find the culprit behind killing both Noel and Marie. Marie, a creche worker at Ivydale Primary in Nunhead, was in the wrong place at the wrong time

The rare technique involves finding possible relatives of the offender on the national DNA database.

It was only when a ‘familial’ match was made for Nathaniel’s father, who was on the database, that police realised they might have got their killer – for his name had been on a list of five hundred ‘nominals’ put together at the start of the investigation.

But by this time, Nathaniel was dead, having taken an overdose.

DCI Rance told the News today that one hypothesis is that Henry took the drugs having experienced a significant downturn in mental health over the murder of Marie – who was in the wrong place at the wrong time.

When police searched Nathaniel’s home after he was found dead in a cupboard, they say they found Noel’s DNA on his coat – seemingly revealing him once-and-for-all as their killer.

“Whilst there can be no court proceedings in this case, we can say that we would have presented a file to the CPS to ask for double homicide charges – and we are not looking for anyone else,” said DCI Harding.

Members of the Brown family today have paid tribute to those they have lost, saying it has been made all the worse by the fact no-one will ever be brought to justice for the horrific crimes. The body parts of murdered Noel have never been found

“The family of Noel Brown would like him to be remembered as a valued man and caring father,” said Noel’s daughter, Sharon.

“This devastating loss has robbed us of his presence unfairly, made worse by the knowledge that no one is being brought to justice for this crime.

“We will be haunted for the rest of our lives by this crime and the suffering Noel endured in his final hours.”

Marie’s half-sister Cassandra, and her daughter, Vanita – aged only eighteen when the murders happened – also paid tribute to her as “extremely gentle and kind.”

“All Marie ever did was care for everyone. Even in her final moments of life she was doing her best to care for people,” they said.

“We will never understand why she was robbed from us. Marie was everything and we miss her so much.”