Master of Reinvention: The man behind Maltby Street’s renaissance 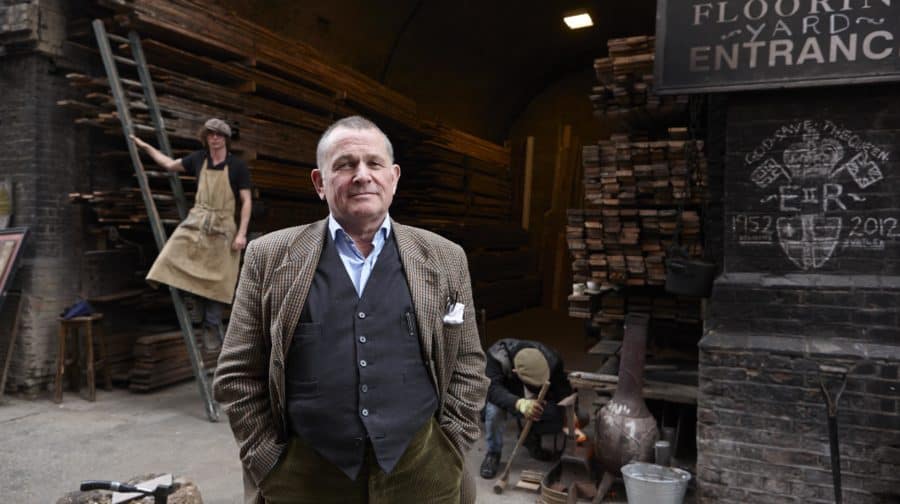 Adrian Amos has always had an enthusiasm for old things. The owner of London Architectural Salvage and Supply Co (LASSCO), which deals in antiques and reclaimed flooring, comes from a family of cabinet makers from Bow in East London, who established themselves in the antique trade.

“I’ve always had a predisposition to saving things,” Adrian said. “Like a lot of young lads, I daresay I was fascinated by my father’s habit of keeping old nails and straightening them out. It’s all about the frugal times of the early 20th century.”

The family set up shop in an old wagon works in Hampstead before taking over a group of ecclesiastical buildings in Shoreditch. “We moved to Shoreditch when it was absolutely on its knees,” Adrian said. “It was beyond rough; it was derelict. We moved there because we had the opportunity to buy, very cheaply, a very large Victorian church with a roof that needed repairs and the ecclesiastical authorities were keen to offload these responsibilities.

“We developed a habit of moving from one historic building to another and this was in the days when historic buildings were considered to be a bit of a nuisance,” he continued. “Nowadays to describe a building as a listed building is to give it a premium, but back in the early ‘70s if something was listed that was an impediment.”

In Shoreditch, Adrian started “this whole thing of architectural salvage.”

“I was taking things out of skips at one end of the street and selling it to householders at the other end of the street,” he said. “In that difference between the two there was a living to be made.

“Antiques comes to us now,” Adrian said. “And we buy from auction. In the glory days of our business there were teams of runners, chaps that would go round and buy from demolition sites.”

The business has always struggled to find enough space and after LASSCO’s home in an old ammunitions factory in Islington was demolished, Adrian was on the hunt for a new premises.

“I was in the habit of driving my very ancient mother around on a Sunday and we always used to favour the more obscure parts of town, the odd spots,” he said.

“We just happened to find ourselves in the backstreets of Bermondsey and there was a For Sale sign. I looked at it and thought perhaps I should take a chance and go south of the river.”

They bought the site and struck some good luck when planning rules changed. Forge architects helped the company get planning permission to develop the site, which they sold on for the development of what is now Bermondsey Central. The business’ early days in the railway arches coincided with the birth of Maltby Street market. “I’ve always been interested in markets and the mash-up of commerce. Everything from antiques and salvage through to food and drink,” Adrian said. “I don’t take credit for the foundation of the market. That has its roots in Anita [Leroy]; she used to open her coffee shop [Monmouth] on Saturday morning and people would flock down to enjoy the coffee.”

Controversy arose, however. “Anita was always very keen that we weren’t referring to ourselves here as a market, because there’s an ancient law that no market could be established within a certain radius of Borough Market,” Adrian said. “And the trustees at that time were very jealous of this regulation. They gave the traders an ultimatum that they couldn’t trade as a market on Maltby Street and keep their stalls at Borough. So they threw a number of them out. This resulted in a terrible furore in the Evening Standard.”

The trustees retreated but “Borough Market’s character was changing at the time,” Adrian said. “There was an awareness that railway arches could be used for something other than motor repair.”

And so, “the non-market sort of became a market,” Adrian said. People set up stalls in front of the arches that LASSCO used for timber. “It dawned on us that this was rather an attractive use. We felt it brought life to the place.” Maltby Street now attracts tourists from all over the world as a result of Trip Advisor recommendations. Managing the market is a delicate balance. “It’s all part of the ongoing friction between different users of central London,” Adrian said. “Generally speaking these conflicts work their way out. There is a change in the demographic and it’s got to be managed sympathetically.”

Adrian believes Bermondsey’s identity is inextricably linked to the bricks it’s built from. “We’re not that gritty,” he said. “I like to think it’s the brickwork. Bricks are very much an indicator that you’re in a town, in a city. We’ve got these wonderful railway arches, which are listed buildings, which is odd. It’s a very long listed building: 3.5 miles long from London Bridge to Greenwich: 864 arches. And it’s the oldest elevated railway in the world.”

When the railway was built, with lime mortar, there was a nationwide shortage of bricks. “Lime is a soft material that never really sets. That’s why they’ve survived this long,” Adrian said. “I think they do have a limited life, the arches. The lines above have an integral drain in them which over the years has broken, so when it rains the arches get saturated and water washes out the lime. They’re taking weights 100 times what they were designed to take. It’s only a matter of time before these arches just become a pile of bricks and sand. It could be said that Maltby Street is the story of the railway arches,” Adrian said. “There is so much history on this site.”

People often ask the antique dealer where LASSCO sources its wares. “They say ‘surely there’s nothing left?’ but it just keeps coming up,” Adrian said. “We had a situation just recently where a very, very wealthy chap had completely remodelled a splendid building and he had 18 bathrooms. He died, it was all stripped out, and whilst we were stripping it out we found that only three of those bathrooms had ever been used.”

“It’s sad but on the other hand it’s that sort of wasted surplus that other people pick up. I’m a great believer that nothing ever goes to waste. It just goes round and round.”

Southwark NewsNewsMaster of Reinvention: The man behind Maltby Street’s renaissance