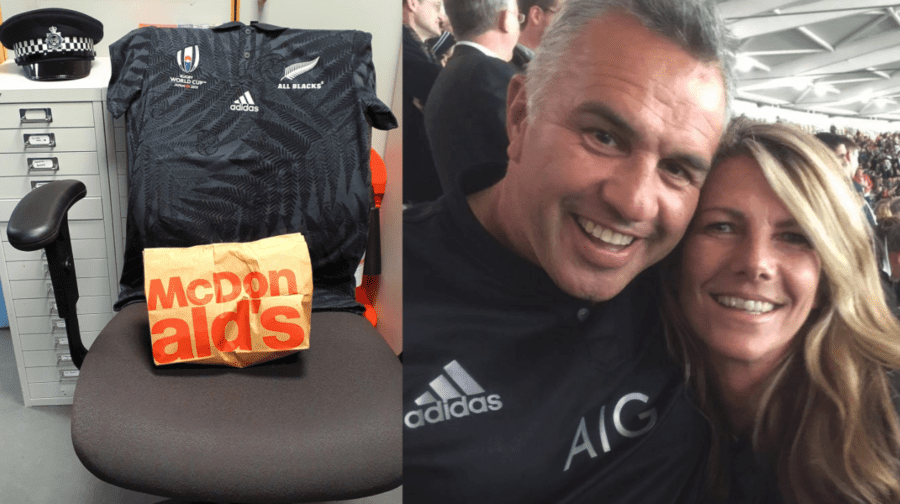 Sgt Matt Ratana died in the early hours last Friday morning at the station after being shot by a handcuffed suspect who is then thought to have turned the gun on himself.

The 54-year-old popular officer had been due to work an overtime shift at the Walworth Custody Suite on Sunday.

Officers who worked alongside Sgt Ratana saved him a chair and bought him a McDonald’s breakfast he was owed in a touching tribute to their fallen colleague.

Sgt Richard Lovelock, who shared the gesture on Facebook, said: “I know it sounds daft but it’s just those touching little moments that have helped us all through yesterday and today.” Officers saved a seat for Matt at Walworth in his memory Image: Facebook / Richard Lovelock

He also worked out the pay Matt would have received for the shift, and donated it to a fund in memory of the officer which will be given to the family.

The memorial fund has now reached over £80,000, while the post has been shared more than ten thousand times.

Matt was due to be covering an overtime shift with us today at Walworth Custody Suite. We saved him a chair and Chris…

“There aren’t really any words for how I am feeling right now about the loss of Matt; about losing someone I loved and was so close to in such a tragic manner,” she said.

“I know Matt touched many, many people’s lives with his friendliness, patience, kindness, enthusiasm and caring ways.” As the News went to press, detailed searches were ongoing at addresses in Norbury and in Banstead in connection with the murder.

The suspect remains in hospital in a critical condition, meaning cops have been unable to speak with him.

A second suspect was still in custody on suspicion of supplying a firearm. “We have traced a number of witnesses who have been able to contribute significant information about the events leading up to the shooting” said Deputy Assistant Commissioner, Stuart Cundy.

“We continue to pursue multiple lines of inquiry and consider the results of initial forensic examinations, including of the gun recovered from custody.”