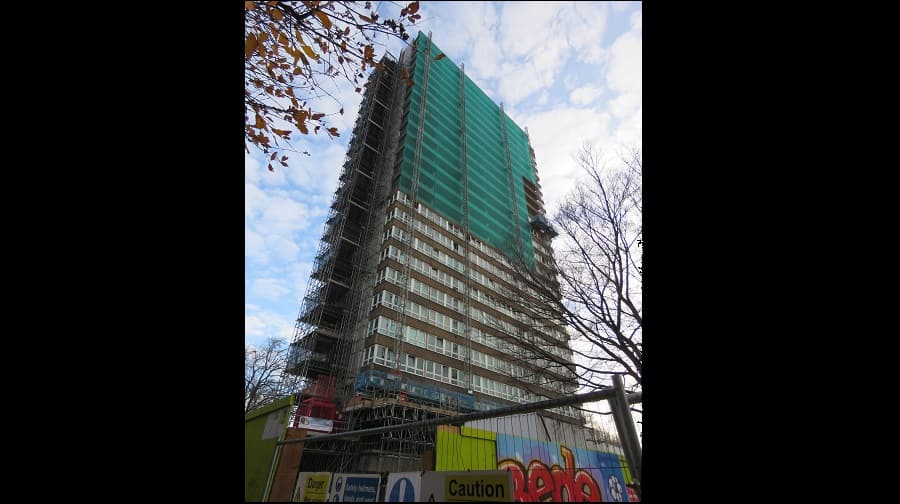 Campaigners will protest outside Bermondsey’s empty Maydew House this evening, over homes standing vacant in the borough.

The tower, on the Abbeyfield Estate, has been largely empty since residents were decanted for works, although it was used for temporary accommodation.

Campaigners say the block should be refurbished “immediately” to house council tenants during the pandemic, which has caused increasing homelenessness pressures in the borough.

But town hall officials say the next phase of the ongoing project to the tower was agreed just last week, to create 255 “top quality” council homes by 2023.

“There can be no good reason to keep empty council homes empty for any longer,” said Tanya Murat, of Southwark Defend Council Housing.

“The Council first wanted to reduce the number of council homes in Maydew House by 42.

“Now they claim that there will be an overall increase in council housing on the Abbeyfield Estate, although we think the rents are likely to be higher.

“But five years after people were removed from Maydew House no building has happened. They should have just refurbished the flats five years ago and keep them as council housing.” The view of Maydew House from Southwark Park

“Alongside the refurbishment of Maydew we’re also building an extra 28 council homes by extending the neighbouring blocks, plus a brand new home for the Bede Centre,” he said.

“The scale of the work need has made it a complex project, with Maydew having to be fully stripped back to its frame and refurbished.

“However work is now well underway with the next phase agreed by Cabinet just last week.  We’re looking forward to handing over the keys to tenants in 2023.”

Protestors will gather for the ‘socially distanced’ demonstration outside Maydew House at 6pm this evening. Protestors carrying signs against empty homes in Elephant and Castle

Their action comes after a demo in Elephant and Castle over empty homes, with campaigners decrying homes standing empty as “investment properties.”

An open letter sent to council leader Peter John, signed by Southwark Group of Tenants Organisations and the 35 per cent campaign among others, called for all currently empty council properties to be refurbished and opened up to the homeless.

It also radically called for the council to requisition empty properties left idle for longer than six months, and use them to house homeless families at council rents.