The plaque was originally designated for the St Giles Church door in 2009, but repairs were needed before the plaque could be mounted 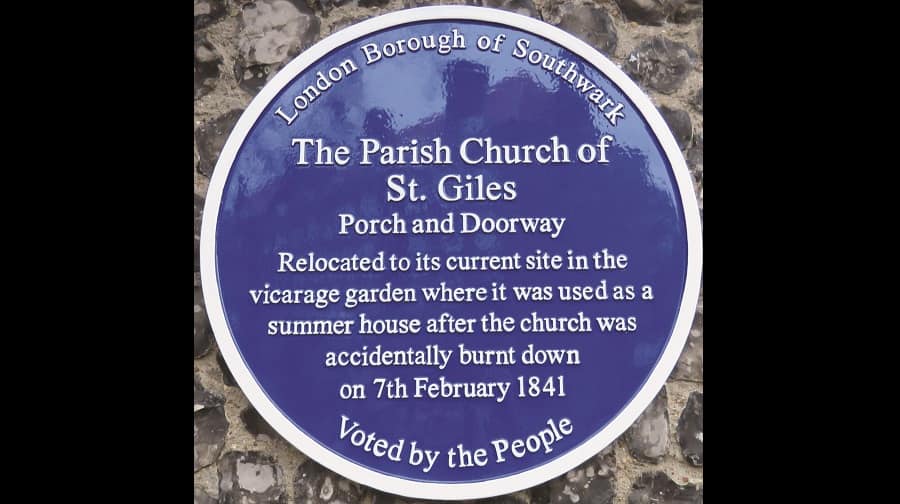 The Mayor proudly honoured Southwark as “the most historic borough in the country” on Thursday as she unveiled the latest winner in the Blue Plaque Scheme, Kirsty Purnell writes.

The original porch door of St Giles’ church, built in 1154, is the latest site to get the nod.  A fire desecrated the Old St Giles Church in 1841 but the porch door remained intact.

The public nominated the porch door as a winner way back in 2009. Extensive renovations were required before the plaque could be mounted because the stonework had been damaged after the council used the site as a binstore.

“When I read about this location and this archway,” said Mayor councillor Kath Whittam in her pre-unveiling speech, “I was surprised that I hadn’t heard of it before. But then, we live in a historic borough and we are tripping over history at every street corner.”

Cllr Whittam acknowledged the importance of historical sites giving people a sense of community and culture and thanked Southwark Heritage Association for their work in seeking funding for and coordinating renovation work.

Cllr Whittam stressed the importance of protecting the borough’s heritage. “It’s good to mark these historic areas and to treasure them,” she said, “We can’t neglect them.”

Speaking of the amount of historic sites in the borough, she said, “It’s like location, location, location here! All around the cathedral, if you stand there and throw a stick you’ll hit something historic,” she said.

The Southwark Blue Plaque Scheme was set up as a partnership between Southwark Council, Southwark Heritage Association and Southwark News in 2003, as a means of honouring important places, people events in the borough. The Council have since stepped out of the partnership.

St Giles’ Porch is the 54th winner in the scheme. The next site to get a plaque mounted will be Surrey Docks Farm.