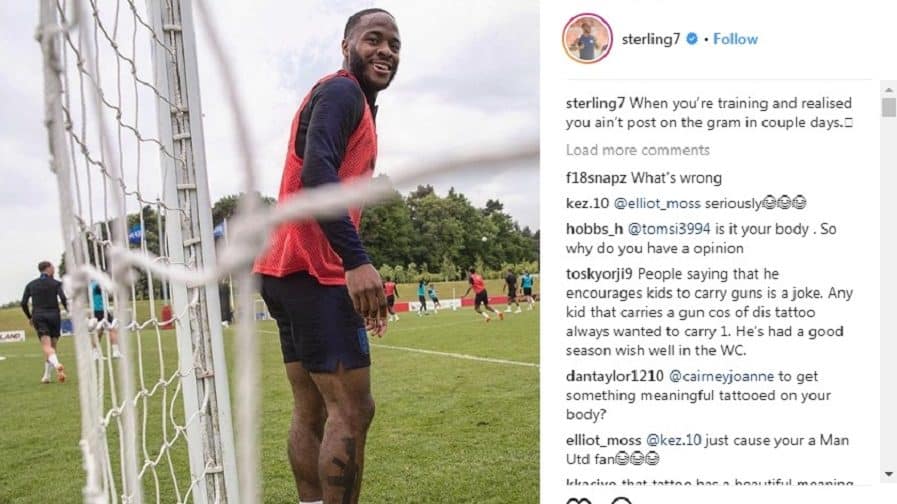 After sharing a training image on his Instagram account with the new tattoo, an MI6 assault rifle, clearly visible, Mothers Against Guns campaigner Lucy Cope, from Peckham, told The Sun the tattoo was ‘totally unacceptable’, and the footballer should ‘hang his head in shame’.

But Sterling hit back at the criticism saying the design was in memory of his father who was died after being shot when Sterling was just two.

He responded to his followers: “When I was two my father died from being gunned down to death. I made a promise to myself I would never touch a gun in my lifetime, I shoot with my right foot so it has a deeper meaning and still unfinished.”

A heated debate has raged on social media, with Sterling supporters saying he is a great black role model and some criticism of him is racially motivated, which others have denied, including high-profile critic Piers Morgan.

Raheem Sterling is a brilliant role-model for kids. He's unfailingly polite; he ignores life's haters; he works incredibly hard to improve himself and become the best that he can be; and he takes care of his mum.

Raheem Sterling is a talented young player and vital to England’s World Cup chances – why is The Sun so obsessed with bringing down our players before they’ve even set off to Russia? pic.twitter.com/nunz0Y6wFj

‘We destroy people’s dreams before they even kick a ball’ – Raheem Sterling’s mentor defends the England star’s decision to get a gun tattoo and says British society is partly to blame for his harsh treatment. pic.twitter.com/KMrlxhvisp

This is such nonsense. There is nothing remotely racist about any of the press coverage of Raheem Sterling. If a white England star suddenly tattooed an assault rifle onto his leg he would get EXACTLY the same response. Playing the race card like this is frankly pathetic. https://t.co/sqSbc4nFFt

Does Sterlings tattoo glorify guns? Tweet us your thoughts @Southwark_News