His jacket is studded with Swarovski crystals, his collars are from Louis Vuitton and he hangs out with A-listers - is Burly Britain's most pampered pooch? 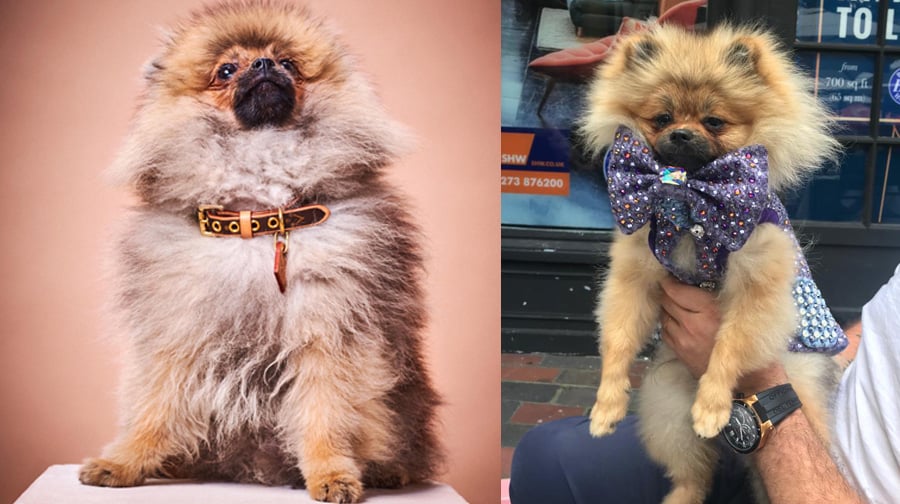 He hangs out with high-profile celebs like Keeley Hawes and Daniel Radcliffe, eats an expensive raw food diet, and wears a £5,000 personalised Swarovski crystal-emblazoned jacket.

Yet Burly Bear, from Borough, isn’t a jet-setting businessman or a trust-fund kid – but a pampered Pomeranian puppy with the designer collars and leads to match.

The star-studded adventures of the cuddly pooch, aged just six months old, are detailed through an account on Instagram, @burlybearpom, which has amassed 7,700 followers in only fourteen weeks.

Burly often meets celebs as one of his owners, Ken, 55, is a freelance fashion hairdresser with top clientele. The pup’s exclusive access sees him regularly meeting well-known names like Alan Carr, Rupert Everett, and Lily Collins – even featuring with the latter on the Vogue website.

His first break came when he met Keeley Hawes as she was getting ready for an event – and she was so taken with him she later asked for the pooch to join her in a photo-shoot for The Mail on Sunday’s You magazine. He has also joined her at a pre-BAFTAs party.

The photos were shot at Syon House, the palatial London home of the Duke of Northumberland.

“We had to get special permission for him to be allowed inside,” said Michael O’Hagan, Ken’s partner, who works in construction.

“Lily Collins also found out we had a dog, so she said bring him to work with you. Now every-time she’s in town she says bring Burly,” the 34-year-old said.

A who’s who of burly bear’s celeb pals: 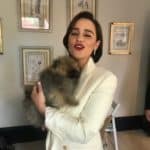 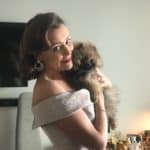 After meeting Keeley Hawes, Burly featured with the famous actress in a photoshoot at the Duke of Northumberland’s palatial home 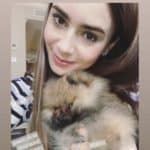 Among his celeb admirers are Lily Collins, the model 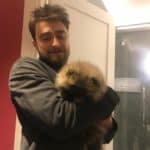 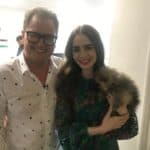 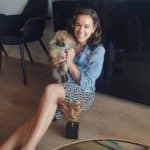 After meeting the model and actress in April, Burly featured with her in a photo-shoot ahead of an exclusive party for Cartier in Shoreditch.

The Pomeranian has an agent and publicist, and is often clothed in designer outfits and accessories.

“He’s got four designer collars, and a Moncler jacket as well,” said Michael. “It was the last one in stock, so we thought ‘we have to get it.’” The puffer garment cost around £400.

Eye-catching collars and leashes are also from top brands: Tiffany’s, Louis Vuitton, Gucci and Furdrobe, a luxury brand for dog bow-ties and dresses featured on Channel 4’s ‘The World’s Most Expensive Presents.’ No expense is spared for pampered pup Burly – including a £5,000 personalised jacket

They cost hundreds of pounds a pop – but no expense is spared for the beloved pup, who the couple have had since April, when he was about ten weeks old.

“He’s got Tiffany’s dog bowls and sleeps on a cashmere blanket. We did get a teddy bear made for him as well,” he said. “He’s more spoilt than me – he’s like our child really!”

The long-list of celeb pals sometimes even comes with some presents for Burly.

Actress Emilia Clarke, best known for her role in Game of Thrones, gifted the Pomeranian a doggie rain mac.

“She said, ‘I’ve got this jacket I’d love to give him,’” Michael told the News. He wears designer collars from Tiffany’s, Louis Vuitton and Gucci, and sleeps on a luxury cashmere blanket

He may even soon hit our TV screens – as footage of him could appear in an upcoming Channel Five series called ‘101 Puppies’, due to come out around Christmas time.

There is, however, one celeb A-lister he has yet to make friends with. “I’d love him to meet Kylie!” said Michael.

His diet is no less pampered either. The pup eats a specialist raw food diet to keep him in top condition for his appearances next to his A-list friends.

One time buying the food, Michael added: “The woman serving said to us: ‘When I come back, I want to come back as your dog!’