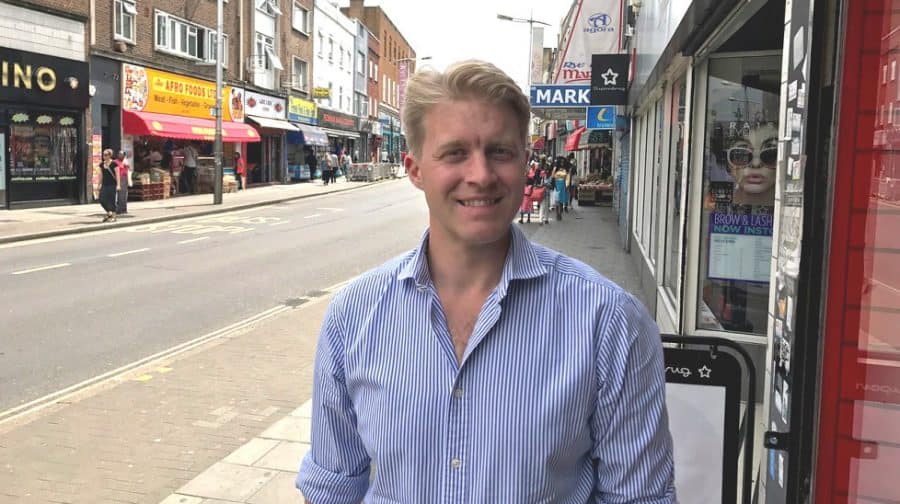 Peckham has been a Labour stronghold for 81 years. And since it was renamed Camberwell and Peckham in 1997, its current MP Harriet Harman has never had a majority of less than 13,000 votes.

Whenever a party finds a candidate who has put their hand up to fight for a seat where they know their chances are next to nothing, you have to think “rather them than me”.

Step forth Ben Spencer, from Beckenham. Ben is a psychiatry registrar – one of many medical positions which falls under the broad term ‘junior doctor’ – who works between King’s College Hospital and Maudsley Hospital. Though Ben’s not quite local, he lived in the area between 2009 and 2012.

Warming up to the interview, he explains why having a strong economy, and therefore managing Brexit, will underpin everything.

“The economy is most important because everything flows from that: that’s jobs and that’s money for services.”

Firstly I put it to Ben that the Brexit negotiations look like they’ve got off on the wrong foot under his party’s watch, with some tit for tat and butting of heads. Theresa May has suggested we could withdraw from providing security intelligence to the EU. Their response was dangling a £100bn leaving fee before our eyes.

“We all need each other in a global economy. I can’t see that it’s going to become embittered. I don’t think it will turn out that way,”

He says: “We’ve got too long a-history together, and there’s too many deep-seated interests. Once we get down to the serious negotiating, I think things will start looking quite different.

One point on Brexit where Labour and the Tories differ is whether we can say (either honestly or not) that leaving without a new trade deal with the EU would ever be worse than a bad deal.

But I ask Ben, could he envisage a “bad deal” ever being worse than the risks May is putting us under if we jeopardise our trade with the EU (to whom we sell about 45 per cent of all our exports)?.

He’s not quite got a direct answer, and somewhat avoids doing so, by denying that it would ever come to that ultimatum.

“We all need each other in a global economy. I can’t see that it’s going to become embittered. I don’t think it will turn out that way,” he says.

Anyway, “enough of Brexit”, I say to Ben, but what about his party’s education policy? In 2015 the Conservatives promised to protect per pupil spending for the next five years.

Now though, education spending is forecast to fall real terms (because not enough extra money is being put in to deal with inflation, and rising pupil numbers).

Schools in Southwark will be hit by a double whammy of losing huge amounts of money under the government’s proposed new funding formula, designed to give under-funded rural schools a bigger share, at the expense of city-based schools. Research from six trade unions, including the NUT, Unison and Unite, found that Camberwell and Peckham schools could lose £1,006 per pupil.

He says “across the country, it’s the right thing to do”, and that £4bn is going to be invested into education to “make sure no school’s budget is affected”.

Yet there’s no suggestion that £4bn won’t be anything more than a one off, leaving affected schools to fend for themselves the following year.

But Ben’s keen to link this back to the economy also (clearly where he thinks the Tories have the upper hand over Labour) and says any sustained funding will depend on continued GDP growth and a good Brexit deal.

Another treasured public service on which I query the Tories’ past manifesto pledges is of course the NHS – one that must be close to Ben’s heart.

Their 2010 manifesto promised “no top-down reform” of the NHS, which they then did in dramatic, uncompromising fashion. And in 2015 they promised the NHS an extra £8bn over five years – a pledge renewed this time around, but without the funding identified – so why should voters trust Ben’s party on the NHS?

He says his party has “a strong track record on the NHS” and explains the Conservatives’ “vision” for the service.

Community pharmacies, he says, could take over from GPs “in a lot of areas” on issues such as “long-term illness management” “community outreach” and “prevention” in terms of weight-loss and prevention of diabetes, helped by the fact that pharmacists are often more well-known in their communities.

But Google the phrase “Conservative plans for community pharmacies” and the third hit is a story from the Mirror, which quotes a Labour MP’s claim that £208m will be cut from pharmacies in England this year.

One area of improvement that recent weeks have shown the NHS desperately needs is with IT.

Ben says the Tories have “committed” to an “IT revolution” with improved cyber security. He bats off my point that his party scrapped an NHS IT upgrade in 2013 (wasting over £6bn in the process).

“I can think of many times when it would’ve been much easier for me to have been able to access someone’s medical records to make decisions,” he says.

“I agree there are lots of issues about it, one is in terms of public confidence, another is in terms of adequate protections. But we have to had an aspiration in terms of modernization of our NHS to make it work efficiently”

But says he “can’t speak more specifically” and “doesn’t want to speculate” on what the approach would be.

I ask Ben: surely it’s up to a government in waiting not to just speculate, but tell voters what their plans are and how much they will cost, before a general election?

He withdraws to saying “I hope these are things [a Tory government] will go forward and think about”.

But don’t we all hope that?