Meet the Bermondsey man who keeps bees in the nude 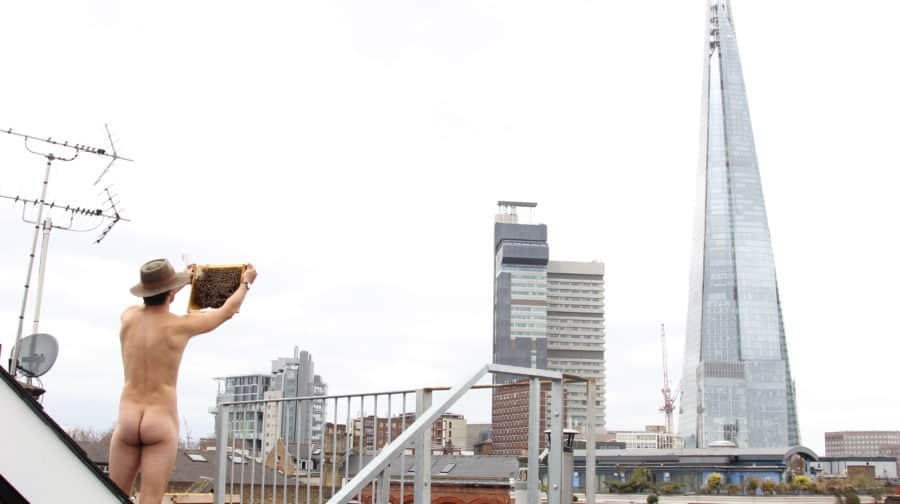 When keeping bees, most would wear a protective suit. But one Bermondsey-based student has taken to keeping them in just his birthday suit.

Naked bee-keeper George Lodge, 23, of Bermondsey Street, often forgoes the hot and heavy bee-keeper’s outfit for nothing but his bare skin.

It started off as a bet with a mate – but he soon turned his naked bee-keeping talents into a charity calendar, in a bid to help a bee-keeper he met in Zanzibar come to the UK for research.

“The first time was about five years ago,” said George, who first started keeping bees with his mother when he was about ten or eleven.

“One of our mutual friends was with us in a full suit and we were there in just our pants, but this hive was quite angry so we got a few stings.” George, pictured in one his poses for the calendar (Image: George Lodge)

Despite the stings, the fifth-year medical student was not put off keeping bees in the nude – and even posed for a naked charity calendar.

While in Zanzibar, he met bee-keeper Khamis Dadi Khamis on a bee-keeping social enterprise, and hit upon the idea of bringing him to England on a research trip.

The idea was for Khamis to come to England to observe bee-keeping techniques, and take back those which may work in Zanzibar, George explained.

To raise the money, George, who works part time for the Bermondsey Street Bees business, managed to sell the naked calendar to different parts of the world over the past year, alongside little pots of honey.

But despite achieving sales as far afield as America, it was not warmly received by all, he says.

“One lady brought a calendar for her ‘secret Santa’ and her secret Santa was Old Bob – and she sent me a picture of him looking very unimpressed!” he told the News.

Some family members even paid him £20 explicitly not to receive a calendar full of his poses with the bees.

The zany approach would not have surprised them too much though, George said. There may even soon be a sequel to the naked calendar featuring other bee-keepers, George told the News (Image: George Lodge)

“Some of my mates thought I was even more stupid than they already thought.

“But I think people are quite used to me so I don’t think they were too surprised.”

In fact, there may even be another naked calendar on the way – with a few extra naked bee-keepers thrown in for good measure.

“I’m starting a new one,” said George, “but I’m hoping some of the bee-keepers who bought one last time might take part.”

Southwark NewsNewsMeet the Bermondsey man who keeps bees in the nude