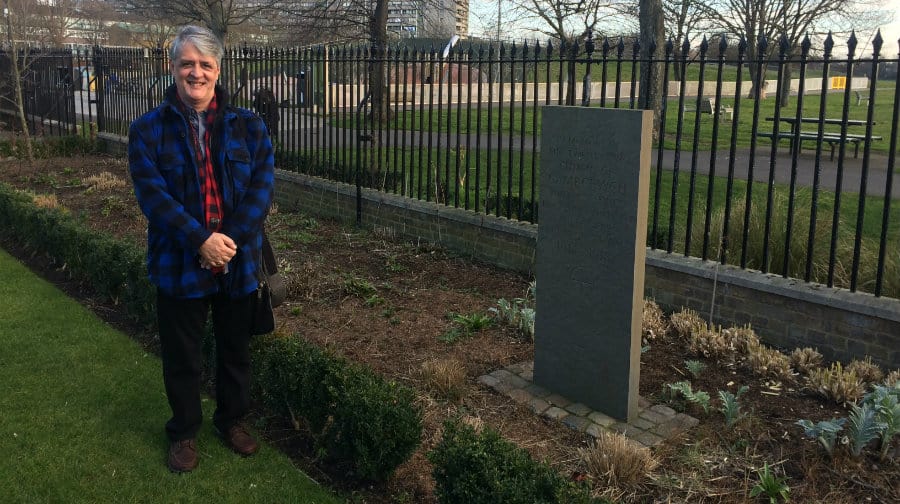 Stephen by the memorial in Chumleigh Gardens

A campaign to erect a memorial plaque to the victims and heroes of a WW1 zeppelin attack in Walworth has reached an early conclusion after a commemorative tablet was discovered hidden in plain sight in Burgess Park.

Last week, the News reported on the campaign by historian Stephen Bourne to mark the October 19, 1917 attack with a memorial, after an original plaque was seemingly lost during the construction of the park.

Southwark Council leader Peter John joined the campaign and issued plans for an “appropriate memorial” to be rededicated to the twelve victims of the bombing and the three Walworth bobbies who risked their lives entering a burning building to prevent the death toll from rising.

However, it has now emerged that a plaque, which replaced the old memorial on the now-lost Calmington Road, already exists in Chumleigh Gardens, not far from where the zeppelin’s “aerial torpedo” actually landed.

Stephen told the News: “Nobody told me it was there, and I actually visited the gardens to look for it on several occasions! I’m delighted to find it though.”

The plaque is now in its second incarnation, after the original was damaged a few years ago during an event in Chumleigh Gardens. For a period, possibly while Stephen was investigating its whereabouts, there was no memorial to the tragedy while a new one was being constructed.

Stephen said: “It is wonderful to have found the tablet commemorating the victims – although sadly there is still no tribute to the police officers who risked their lives.”

When the bomb fell, Inspector Edward Wright, PC Jesse Christmas and PC Robert Melton, who was actually off-duty at home just a few houses down from the blast, raced to the scene. They entered the wreckage, despite flames and a gas leak, and managed to save a number of people who were cowering in the basement.

Using old maps, Stephen tracked down the site of the bombing, located at the old corner of Calmington Road and Albany Street, which is now covered by trees after the area was cleared to make way for Burgess Park after WW2.

Stephen said: “It is incredible to think something so dramatic happened here. It is a shame there is no plaque here but I was told it was placed in Chumleigh Gardens due to the threat of it being vandalised on the main road. The important thing is that we have found the tablet, which is rightly honouring a tragic event.”

The plaque itself, located in Chumleigh Gardens, Burgess Park