One of the memorial plaques, dedicated to Colonel Gaddafi, reads: "have i told you lately that i love you?" 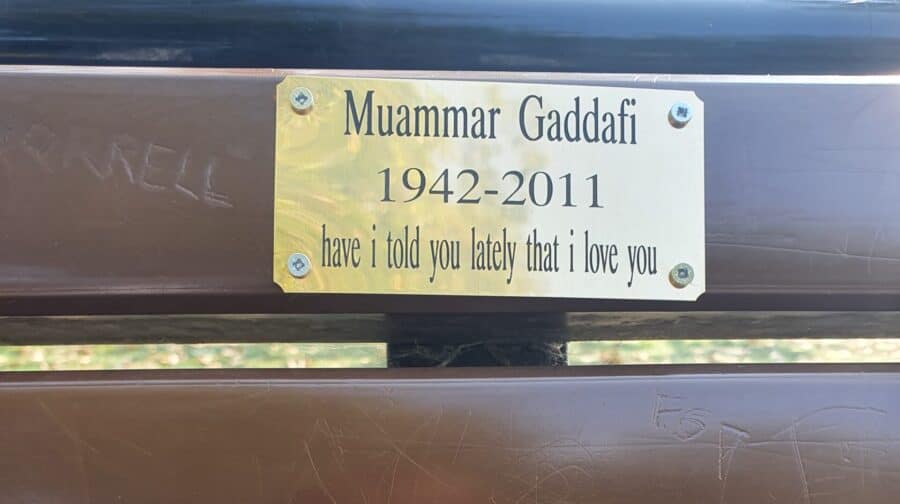 One of the plaques appears to be dedicated to Libyan despot, Colonel Gaddafi

Plaques dedicated in memory of dictators such as Kim Jong-il and Colonel Gaddafi have mysteriously appeared on benches in a Dulwich park.

The plaques on benches in Goose Green are dedicated to the North Korean dictator Kim Jong-il; Colonel Gaddafi of Libya; Romania’s Nicolae Ceascecu; and the Russian revolutionary Peter Kropotkin. A plaque for Colonel Gadaffi, who was killed after his capture by a militia in 2011, has the barmy caption: “have i told you lately that i love you?”

Another is for the communist leader Nicolae Ceausescu, who was executed by firing squad on Christmas Day, 1989. His memorial plaque states: “1918-1989. Do ya think I’m sexy?” A plaque to the Romanian dictator reads: “Do ya think im sexy?”

A fourth, and final, plaque dedicates itself to Russian anarchist Peter Kropotkin, which has a tagline from an advert for the cleaning product, Cillit Bang. It reads: “Bang! And the dirt is gone!”

Baffled park-goers in Goose Green did not appear to know much about the plaques when asked by a News reporter this afternoon. The unassuming benches have plaques dedicated to dictators and revolutionaries

One woman, who had been sitting on a bench dedicated to Kropotkin, was unaware of the anarchist, and had thought he was a deceased local whose family members had donated a plaque.

Another person had stopped to take a photo of a plaque dedicated to Ceascecu, because of its bizarre tagline, but did not know who he was.

Asked why he thought the plaque was there, he said: “I don’t know, it is one of those modern art things, like a Banksy?”

Mystery surrounds the plaques – but this is not the first time plaques dedicated to despots have been spotted in a London park. The plaques have mysteriously appeared in Goose Green, East Dulwich

In 2018, a plaque dedicated “in loving memory” of Saddam Hussein was spotted in Wanstead, east London.

Nobody ever came forward to claim responsibility for the plaque, which had sparked a backlash among some for insensitivity.

Redbridge Council later removed it. Southwark Council has been contacted by the News for information about the plaques and whether they will be removed.

Do you know who’s behind this? Contact us on josh@southwarknews.co.uk.