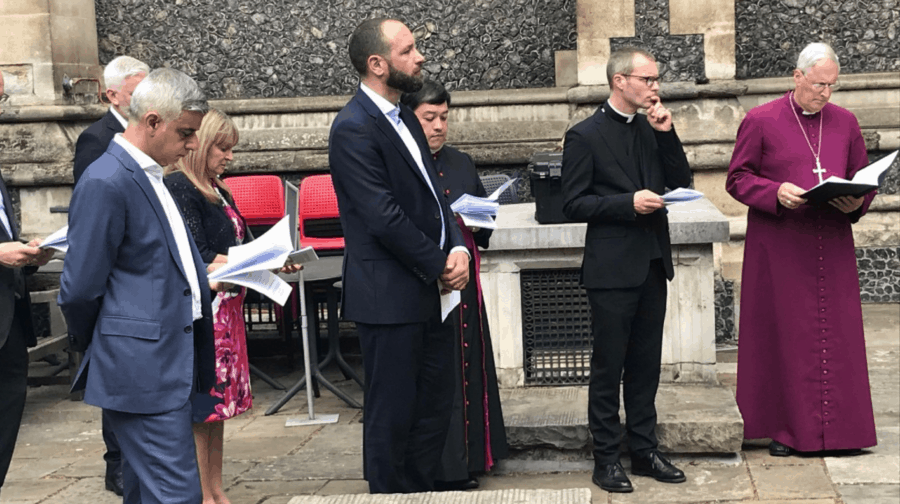 Sadiq Khan and council leader Kieron Williams were among the attendees

A memorial service has been held for victims of the 2017 London Bridge terror attack on the fourth anniversary of the tragic events.

The Bishop and Dean of Southwark, London Mayor Sadiq Khan and Southwark Council leader Kieron Williams were among those who laid wreaths at the ceremony outside Southwark Cathedral by London Bridge.

Dean of Southwark Andrew Nunn said: “On the evening of the 3rd of June 2017 eight people lost their lives. Eight people working here, enjoying this place, relaxing in its inclusive atmosphere. They were eight people from around the world, as were the 48 people whose injuries we know about and the many people who were mentally and emotionally scarred that evening.

“Then in November 2019 there was a second attack in this area, as two people were killed and others injured at Fishmongers Hall. And for many in this community, old wounds were reopened and old memories were revived.”

Attendees laid their wreaths at the foot of an olive tree planted in commemoration of the victims of the attack.

“The olive tree… was planted and blessed on the first anniversary of the attack,” the Dean added. “Around its base are written some words from the Bible. The leaves of the tree are for the healing of the nations. Those words are as true today as they were back then.”

‘Lion of London Bridge’ Roy Larner not given George medal despite 24,000 signatures

Among the 48 people who were injured in 2017 was Millwall fan Roy Larner, who screamed “f*** you, I’m Millwall” and was stabbed eight times as jihadis armed with hunting knives tried to force their way inside the Borough Market pub he was drinking in.

At the service, Warren Scott of the British Transport Police (BTP) read from the Bible’s book of Romans. David Quirke-Thornton of Southwark Council gave a reflection on his experiences of the aftermath of the 2017 attack.

“To be honest, it still feels like yesterday,” the director of children and adult’s services said. “Sometimes it feels like time and space get confused in our minds, but perhaps we remain unsettled in our hearts. In our minds we try to make sense of what happened…

“We hoped that the inquest would help us to make sense of it all. But in truth the more we know, the more we realise just how utterly senseless it was. And that is deeply painful still. Within minutes hearts were broken, lives were changed forever. Words fail to describe the sadness of it all.

“In the aftermath many people came to this place. They bowed their heads in deep respect and stood in silence. In a gesture of love and solidarity, Muslims lined London Bridge and handed out 3,000 roses to people walking over the bridge. Hundreds of imams joined faith leaders here to say ‘not in our name’.”

Cathedral staff limited the numbers who could attend the service last Thursday, June 3, because of Covid-19 concerns, although the service was held outside. People who were not invited were able to watch on the cathedral’s YouTube page.

Council leader Mr Williams said: “Our thoughts are with everyone affected by the dreadful events that happened four years ago today.
“Whether you were here in person or joining us from afar, we hope the service today brought some comfort to know that we are in each other’s thoughts.”

Mr Khan added: “On the fourth anniversary of the appalling terrorist attack on London Bridge, Londoners are once again uniting to remember the victims, their loved ones and the heroic first responders who ran towards danger to try to save lives.

“This cowardly attack sought to fracture our communities and destroy our way of life. It was not only an attack on London, but an attack on the freedoms and values we as Londoners hold dear. Despite the loss of eight precious lives, the unshakeable spirit of our city serves as a reminder to all who would seek to divide us that they will never succeed.

“Four years have passed but Londoners will never forget the innocent victims of that tragic day. We will continue to mourn their passing and honour their memory by remaining united. I am proud that Londoners recognise we have so much more in common than that which divides us and I know we will help heal our great city by staying true to the values that bind us together.”