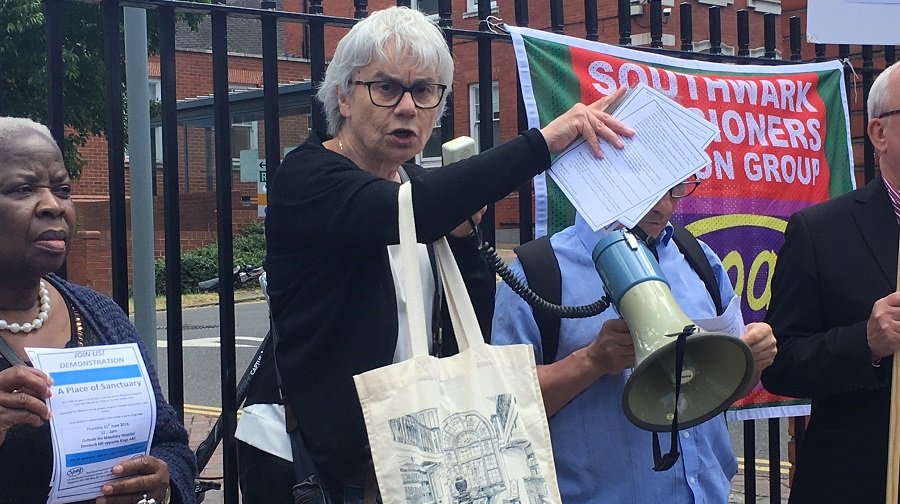 Southwark Pensioners' Action Group (SPAG) organised a demonstration outside Maudsley Hospital, in Camberwell, to call for a 24-hour 'place of sanctuary' for mental health patients to be opened

A campaigner who organised a demonstration outside Maudsley Hospital for a 24-hour “place of sanctuary” for mental health patients said he had “never had so many people on his side”.

Since the emergency clinic at the psychiatric hospital in Camberwell was closed in 2007, patients have been directed to King’s College Hospital accident and emergency department nearby.

But campaigners say the busy A&E can feel like an “awful place to be” for patients suffering a mental health crisis – and that they want to see a separate 24-hour walk-in centre opened, especially for children, young people, pregnant women, and women with babies. “I’ve been doing this for seventeen years and we’ve never ever had so many people on our side saying this is the right thing to do and this includes a lot of the staff.

“The one thing these people care about is people and this is why we do it.”

“I’m really indebted for the support that the MPs are showing us,” added the 76 year old, who lives in East Dulwich.

As well as members of SPAG, there were also representatives from Lambeth and Southwark Unite Community branch and campaigning organisation Keep Our NHS Public at the event on June 21.

Helen Hayes, MP for Dulwich and West Norwood, said she was “very grateful” for SPAG’s work in campaigning for better mental health services in south London. “Mental health must receive parity of esteem with physical health, but currently falls far short of this,” she said.

“I support SPAG’s proposal for better access to support for people in mental health crisis, particularly children and young people and new mothers.

“Parity of esteem can only be achieved through increased funding, and I am calling on the government to make additional funding available to SLaM to ensure that everyone who needs mental health care and treatment can access it without delay.”

Neil Coyle, MP for Bermondsey and Old Southwark, added: “I have spent my life involved in mental health; my mum has schizophrenia and this had a dramatic impact on her and my whole family. “Seeing her not get the help and support she needed for her illness was one of the main driving factors behind my decade working in disability rights and for going into politics, where I have remained focussed on this issue.

“The Government talks the talk about ‘parity of care’ but has slashed back mental health services and other support, like crucial benefits.

“And even for those who can access care, some bad old signs are re-emerging. “Less choice and control over services for people with mental health conditions and their families as well as a rise in coerced treatment. This simply should not be happening.”

A spokesperson for South London and Maudsley NHS Foundation Trust previously told the News that considering a separate emergency department for psychiatric patients at Maudsley Hospital would be a “considerable step backwards for the parity of esteem for our patients”.

“Many patients with mental health problems attending A&E also have significant physical health conditions that require urgent assessment and treatment, which are best addressed within an A&E,” said the spokesperson. “A significant number of these patients also require mental health assessment and treatment. This is particularly true of our elderly population who may present with either delirium or dementia.

“The Trust has dedicated psychiatric liaison teams working within local A&E departments who work with other clinicians to provide an integrated service that addresses people’s whole health needs.

“The Trust is aware of the significant demand that there currently is within KCH and other local emergency departments to meet demand and ensure that patients are kept safe and their needs are met.”