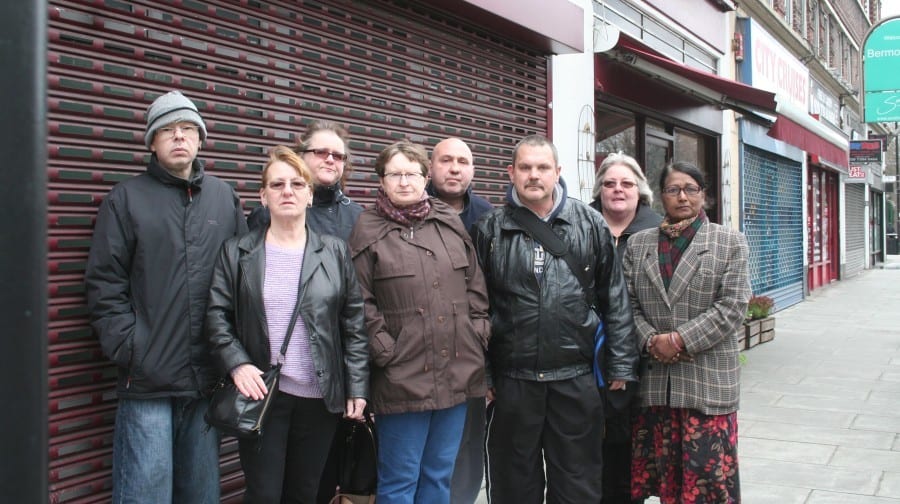 Marie Robertson (second from left) has been taking her son to the Opendoor Resource Centre in Jamaica Road for twenty years, like many of the service users pictured. Local Cllr Eliza Mann, far right.

“There’ll be a number of people who will take their lives” is the stark message coming from the leader of a mental health charity in Southwark as three day centres close in the same month.

With changes to the way mental health services are funded, the end of the financial year last week called curtains on centres across the borough where people have been going for support for twenty years on some occasions.

Marie Robertson has been taking her son to the Opendoor Resource Centre in Jamaica Road, Bermondsey, for some twenty years and says he is ‘very upset’ at the closure last week.

“Some people are saying they are going to kill themselves,” said the 69-year-old full time carer.

“They’re distraught some of them. It’s their family – they haven’t got anyone else because a lot live on their own.”

Around 70 people regularly attend the centre, with many anxious when it closes for a bank holiday. “They go there and chat with each other and help each other out,” said Marie. “Any problems they’ve got they’ve always got someone to help them.”

Liberal Democrat councillor, Eliza Mann, whose Riverside ward is where the centre is based, said: “These day centres carry out incredible work with some of the most vulnerable members of our community.  It is outrageous that they will be forced to close their doors at the end of the month because their funding suddenly runs out.

“The issue is not just that there is a lack of funding out there, but that they also don’t know who to turn to for help or support. These users feel the CCG [Clinical Commissioning Group] and the Labour council are just not listening and are dictating the services they want to see provided, rather than asking these users.”

The way mental health services are funded has changed dramatically over the last few years, with money taken away from services and given directly to service users in the form of personal budgets.

The idea is that everyone has the choice of what services they buy, giving them a tailored package of activities or therapies suited to their needs.

But those on the front line of mental health services in Southwark are warning that not enough people are eligible for personal budgets; those who are don’t get enough to afford what they need and the services they want to buy may have closed due to the cuts.

Jo Claire, of The Crossways Centre in Peckham, which also closed last month, said less than ten people out of the 140 who used the centre had personal budgets, leaving most of them with nowhere to go.

“We are worried,” she said, “mostly about people we know we’ve kept out of mental health services because they’ve had Crossways.

Victor Logan, 59, a spokesman for Southwark Mental Health Service Users, attended the Lorrimore Centre in Camberwell for several years until it also closed last week, which he said was like  “a kick in the head when you’re down.”

“The danger is that people will have nowhere to go and they’ll turn to drink and drugs and instead of getting better they’ll get worse.

“I think it’s time that people knew the damage that’s being done,” he told the News.

Michelle Baharier, who runs Walworth based mental health charity CoolTan Arts, says they are also in a very vulnerable position. She has had to let four staff go in the last month, with 90 people coming through the door every day and not enough people to help them.

Since the personal budgets were first introduced in 2011, Michelle says 50 per cent of people on her books went back into hospital within three months and ten percent tragically killed themselves.

With the latest closures of centres across the borough, Michelle said: “There’ll be a number of people who will take their lives. We are already seeing people who have lost weight. “We’ll lose them through self neglect and nobody will know they’re not well.”

Southwark Clinical Commissioning Group (CCG), who allocate funding for mental health services in the borough, are setting up a new Wellbeing Hub, which is due to open in Peckham in May and will give advice and guidance on what kind of services are available to people in the borough. In the meantime, a spokesperson for the CCG and Southwark Council said those affected were receiving information about alternative support available locally.

“We recognise that changes we are making in the way mental health services are funded will result in a small number of people accessing support from services they have not previously used.

“When we speak to local people we hear frequently that the way mental health services work in Southwark hasn’t changed for many years and that we need to move away from a ‘one-size fits all’ approach. The work we have done to make services more responsive to individual needs has been driven by the people using local services and professionals who work in them, who want people to be in control of their care.

“We are confident that the variety of services available in the borough means that the right support for each individual is in place and we are committed to helping people to get the care they need to achieve independence and recovery.”

From Tuesday 5 May the new Southwark Wellbeing Hub will be available for information and advice at Thames-reach Employment Academy, 29 Peckham Road, London, SE5 8AU

In the meantime, mental health service users are being directed to the following services:
Southwark Your Way

Drop in for wellbeing activities and peer support groups

Tuesday between 10am and 2pm and Friday 9am and 3pm

For general enquiries please email us at: info@blackfriars-settlement.org.uk

A relaxing café and imaginative space, open to all, located in.

Open Monday, Wednesday and Fridays between 11am and 3pm