MIAMI – without the vice

The Urabn Fox heads to Near and Far for brunch with a booze-free twist... 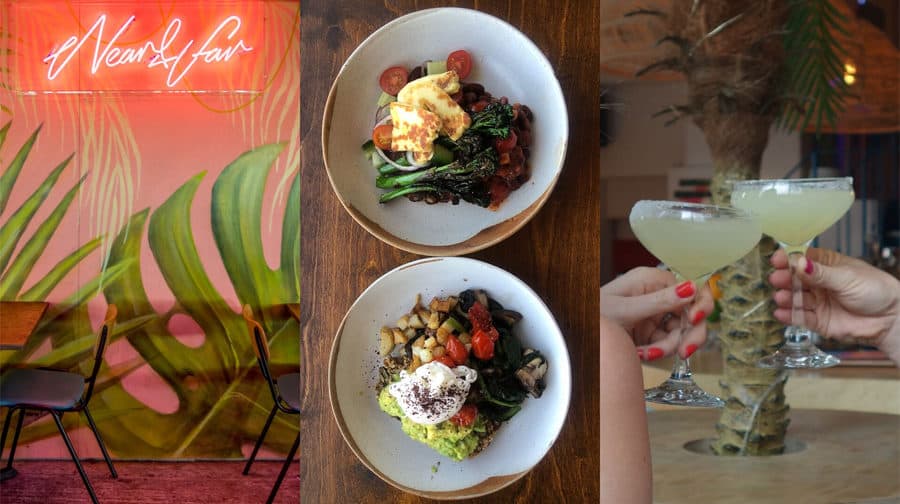 Once upon a time, anyone suggesting an alcohol-free bottomless brunch would get a quick response from me: “Why?”
The whole point of brunch is its thrilling disregard for time and rules. Unmoored from dour breakfast and snippy lunch alike, it’s the only meal where quite literally anything goes (kedgeree: case closed) and you can have that mimosa because, y’know, toast, writes Cara Cummings… Hell, brunch was invented so loose morals could prosper – Edwardian writer Guy Beringer conjured the concept to avoid a crushing hangover. He’s long gone to the bottomless Buck’s Fizz in the sky, but his theory still stands: supping booze and bacon is the ultimate escape from reality. And after some seriously wobbly years – I’m looking at you, Brexit – is it any wonder we’ve flocked to bottomless brunches in droves?

But can it ever be the same without a dash of debauchery? The founders of Near & Far at Peckham Levels think so. Last month, they launched London’s largest non-alcoholic drinks menu featuring more than 20 booze-free mocktails, beers, wines and even 0% spirits. To celebrate – hmm – the range is now served alongside a 100% veggie and vegan menu as part of a dry bottomless brunch, available at weekends.

I convince three friends to join me in giving it a whirl. The fact that it’s January probably helps; everyone’s flirting with dietary intolerance. “I’m doing dry Jan/Veganuary/sugar-free/no dairy but
cheese a bit…” April might be the cruellest month, but January’s the most annoying.

It’s also helps that Near & Far is officially South London’s Most Instagrammable Venue (a thing, honestly). If we won’t be on the lash, we may as well go for likes.
It’s easy to see why Near & Far draws the ‘Gram crowd. Full of stylish furniture, feature wallpaper, plants – that’s a real palm tree – and a central bar that wouldn’t look out of place at a Miami pool party, it’s cool. Very, very cool. And with domed windows throughout, you’re guaranteed beautiful views. It’s a gorgeous space for whiling away an afternoon.

The food menu is refreshingly simple, featuring just four completely vegan choices, with the option of adding eggs and halloumi for committed protein fans. The no-booze drinks list, however, is the opposite. With 6 mocktails, ‘alt’ gins, whisky and rum and even alcohol-free sparkling wine, its astonishingly. Why bother boozing with virgin beers, No-Groanis and non-gin and tonics to choose from instead? Something I’m immediately grateful for, as one by one my friends opt for the alcoholic brunch on offer instead. Cheers, guys.

Now the only sober vegan at the table, I decide to go all in with a Feragaia Sour and vegan pancakes. The ‘alt. whisky’ mocktail is as fresh and zingy as its boozy cousin, if not better. (We try a straight shot of the ‘whisky’ later: so densely peaty and aromatic, it could be the real deal.) It beats the Virgin Mary I try next, which despite liberal additions from Near & Far’s fun ‘tweak your own Bloody Mary’ station stocked with horseradish, Tabasco and even sundried tomatoes, lacks punch.

Our food arrives: every dish looks sensational. Who knew some of the most stylishly presented brunch in London could be found six flights up an old car park? My pancakes are perfectly cooked; fluffy clouds piled merrily with tart jam, fresh fruit and generous lashings of maple syrup. As for the added granola – I’d feared the result might taste like one breakfast accidentally tipped onto another, but it’s a triumph of textures.
My friends, meanwhile, fall into rapt silence over their plates of pan-fried mushrooms on sourdough, and roasted butternut squash with sweet peppers, tahini and pomegranate. Given they’re three Aperols in, that’s saying something. In fact, the bread is so good, they ask our waitress for details of the supplier.

I worried I’d feel left out as the designated bruncher. But the only difference between my friends’ experience and mine is that after we trot happily off into the afternoon, I can remember the name she gave us.
Dry brunch? Consider me converted. Southwark NewsNewsMIAMI – without the vice