Fans have raised over £2,800 after putting aside their differences to march ten miles in murdered Jimmy and Rob's memory 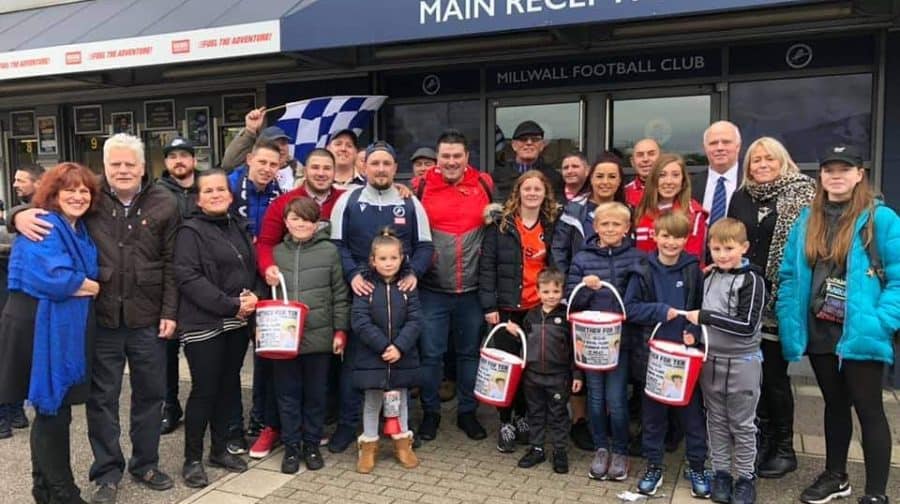 A ten-mile march by Millwall and Charlton fans in memory of murdered teens Jimmy Mizen and Rob Knox raised over £2,800 for charity.

The ‘Together for Ten’ walk saw Lions and Addicks fans put aside their differences in memory of the murdered teens, by walking from Sidcup station to The Den prior to the derby on Saturday.

Millwall supporter Jimmy was killed in 2008 aged only sixteen in a Lee Green bakery altercation, while eighteen-year-old Charlton fan Rob was fatally stabbed outside a Sidcup bar the same year. Jimmy (pictured) was killed in 2008 in Lee Green

Money from the march, organised by Millwall fan Dan Poore and Charlton supporter Craig Peppiatt, will be split between the ‘For Jimmy’ charity, and Charlton Athletic Community Trust.

“It went really well,” said organiser Dan Poore. “We had people running across the road to stop and talk to us.

“We had one lady who stopped us to say, ‘are you the guys doing the march’ and then she ran off to go give us some money.”

“My feet are a bit sore but the actual walk was so easy because we had such a fantastic group of people doing it.” READ MORE: Millwall and Charlton to march to The Den together in memory of murdered Jimmy Mizen and Rob Knox

The parents of Jimmy and Rob were waiting for the group at The Den – and they were given a round of applause by fans as they made it into the ground.

“Everyone was applauding us as we went into the ground by the ticket office,” Dan added.

“Margaret [Jimmy’s mum] was the first person I went up to and I gave her a hug and she said, ‘thank you so much.’ “They all seemed so grateful for what we’d all done.” Around 25 people took part in the march – and they made it to The Den in under four hours, despite stopping off for a “cheeky pint” half-way through.

The route saw the group set off from Sidcup, where Rob Knox lost his life, to Lee Green, where Jimmy was killed, to The Den. The boys’ parents will take part in the ten-mile walk if its held again when Charlton and Millwall next play against each other.

One Millwall fan taking part, Elizabeth Coombs, said beforehand: “I’m walking the Together for Ten in memory of all the young kids who have lost their lives to violence. I hope this sends a message out to help change the future for our children.”

Charlton supporter Sami Ibrahim added: “I am walking for Together for Ten to help prevent lives being taken so young and I’m doing it for the future of my children and our youth.”

Millwall won the clash after an extra-time header by substitute Matt Smith saw the Lions pull ahead 2-1.