VIDEO: Millwall and Charlton to march to The Den together in memory of murdered Jimmy Mizen and Rob Knox

"If there are some things we don’t have in common, one thing we do have in common is wanting to build a better future for the area we live in." 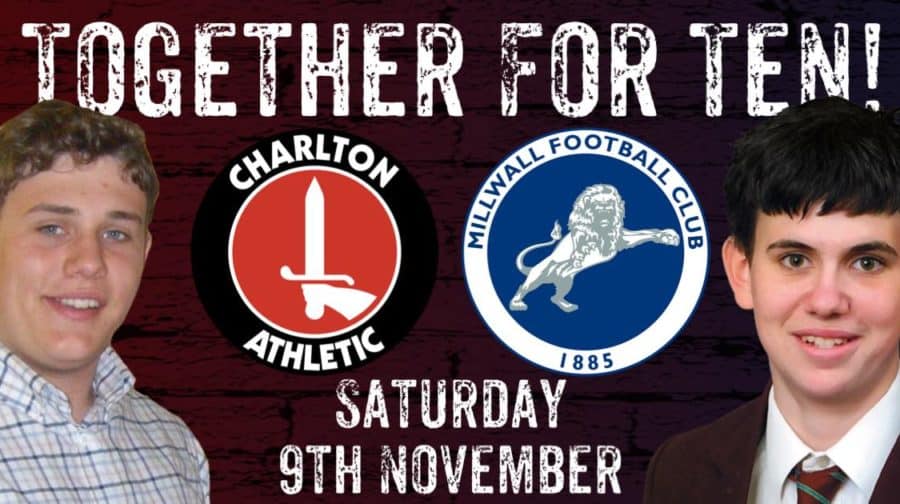 Millwall and Charlton Athletic fans will put aside their rivalries ahead of their derby this Saturday in memory of two young fans of the clubs who were murdered.

Lions and Addicks supporters will march ten-miles from Sidcup station to The Den for the game in memory of murdered Jimmy Mizen and Rob Knox.

Millwall fan Jimmy was killed aged only sixteen in 2008 in Lee Green, after an altercation in a bakery. Eighteen-year-old Charlton supporter Rob Knox was fatally stabbed the same year after intervening in a fight to protect his brother outside a bar in Sidcup.

Money from the sponsored ‘Together for Ten’ walk will be split between the For Jimmy charity set up by Jimmy’s parents, and the Charlton Athletic Community Trust at the request of Rob’s mother, Sally. Fans will take a route from Sidcup to Lee and then onto the Den via Deptford in a show of solidarity against crime in the boys’ memory – and supporters of both sides are urged to get involved.

“Millwall and Charlton are the two biggest clubs in south-east London and I think if there are some things we don’t have in common, one thing we do have in common is wanting to build a better future for the area we live in,” said Dan Poore, a Lions fan who has helped organise the march alongside Charlton supporter Craig Peppiatt.

“I’m a father myself, I’ve got three young kids, and the violence [in London] is so scary.”

The 27-year-old approached Jimmy’s mother, Margaret with the idea for the march, which is the first time it has taken place. Both sets of parents will be there on the day, said Dan.

“This is the first time we’ve done it so if it goes well, we will do it again when we play Charlton in April,” he said. A video made by Dan also shows supporters of both teams voicing their support for the march, and encouraging people to donate money. So far £760 has been raised.

One Millwall fan taking part, Elizabeth Coombs, said: “I’m walking the Together for Ten in memory of all the young kids who have lost their lives to violence. I hope this sends a message out to help change the future for our children.”

Charlton supporter Sami Ibrahim added: “I am walking for Together for Ten to help prevent lives being taken so young and I’m doing it for the future of my children and our youth.”

how to get involved in together for ten: Those wanting to take part in the ten-mile walk in memory of Jimmy and Rob before Saturday’s game should message the Together for Ten social media sites on Facebook, Instagram and Twitter for more details.

They can all be found under the handle @togetherforten.

The ten-mile walk begins at 9am at Sidcup station. Those wanting to walk the home stretch should meet at Deptford Park from 12.30pm.

That’s so lovely and I love to see charlton and millwall getting along nicely ??

Southwark NewsNewsVIDEO: Millwall and Charlton to march to The Den together in memory of murdered Jimmy Mizen and Rob Knox