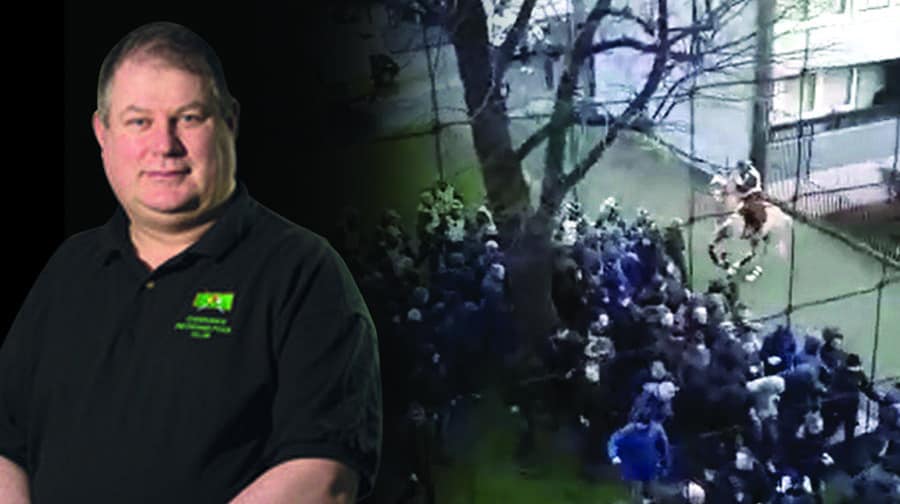 A Surrey Quays publican is facing a bill of thousands of pounds after his boozer was trashed in the outbreak of serious violence between Millwall and Everton fans on Saturday.

Ciaran Canavan, owner of Whelan’s Pub on Rotherhithe Old Road, said his windows were smashed, woodwork damaged and fencing was demolished during the disorder prior to Saturday’s match, labelled by police as among the worst football violence the city has seen for years.

“We’ve had two broken windows, we’ve had a lot of woodwork damage, the fence at the front of my pub was demolished, plants were ripped up.

“The road outside was just a sea of glass.”

Trouble broke out when Everton and Millwall supporters began fighting on nearby Hawkstone Road at around 4pm. Away fans allegedly came down to Rotherhithe Old Road from Hawkstone Road before being met with a police response at the opposite end – therefore being bottlenecked outside the pub.

Officers attempted to corral the estimated fifty to seventy-five disorderly fans through a car-park near to the Millwall-supporting pub, before realising it wasn’t a thoroughfare, said the publican, making the problem worse.

“Why was this allowed to happen? Why didn’t they [the police] corral them better or control them better?” he asked.

“When they’re passing the flats in front of my pub, I can see the police leading through the carpark. It’s like they didn’t know my pub existed.”

Warring football supporters even brought snooker balls with them in their pockets to throw, alleges the pub landlord. “There were about five or six snooker balls outside the pub which they [fans] must have brought with them,” he told the News.

The 52-year-old has received a crime reference number from the police but said it was an email which could not be replied to. Pub-owner Ciaran Canavan said police failed to corral away fans from his pub, leading to an outbreak of violence

Asked by the News if there had been any changes to normal policing proceedings prior to the match, a Met Police spokesperson said a “proportionate policing plan” was put in place, based on “available intelligence.”

“Coaches carrying away supporters were provided directions to drop them directly outside the stadium, where a stewarding plan was in place to facilitate access inside,” said the spokesperson.

However, around 4pm, more than 150 unexpected Everton supporters came out of Surrey Quays Overground Station and made their way down Rotherhithe Old Road.

“Officers from the Met and colleagues from British Transport Police were instantly deployed to the area in order to respond to any incidents which may occur,” the spokesperson continued in response to the News’ questions.

“The officers did not provide a police escort.

“Shortly after 16:00hrs disorder occurred between the group of away supporters and home supporters near a pub on Rotherhithe Old Road. Some damage was caused to the venue as a result.

“A further plan was put in place post-match to escort away supporters back to coaches, to prevent a further outbreak of crime and disorder.”

Now staff at the popular drinking spot – who were left “shocked and upset” at the outbreak of violence – fear that the pub may be a target in any future clashes between fans.

“I had three staff on and myself. We were all shook up, we weren’t expecting that at all. They [the staff] were really shocked and upset,” said Mr Canavan.

“All the Millwall fans, they come here because they know it’s a safe haven. They are scared it’s going to be an ongoing thing. Is my pub now going to become a target?” Meanwhile, rumours that the Surdoc Social Club, on nearby Cope Street, had been rented out to Everton fans for Saturday’s game  – leading to a large build-up of away fans near to Millwall supporting pubs – were categorically denied by the establishment.

“It would just be ridiculous that we would have any of those [Everton] fans here on a match day,” said the club’s secretary Lorraine Smith, who was on duty on Saturday evening.

“It’s a rumour put out on social media, but it’s totally untrue. We had police around here on Saturday night asking whether there had been a fight outside, but no.

“We had a few Millwall fans in here [on Saturday] enjoying a drink.”

I feel there should be a go fund me page set up to help pay for the pubs damage.