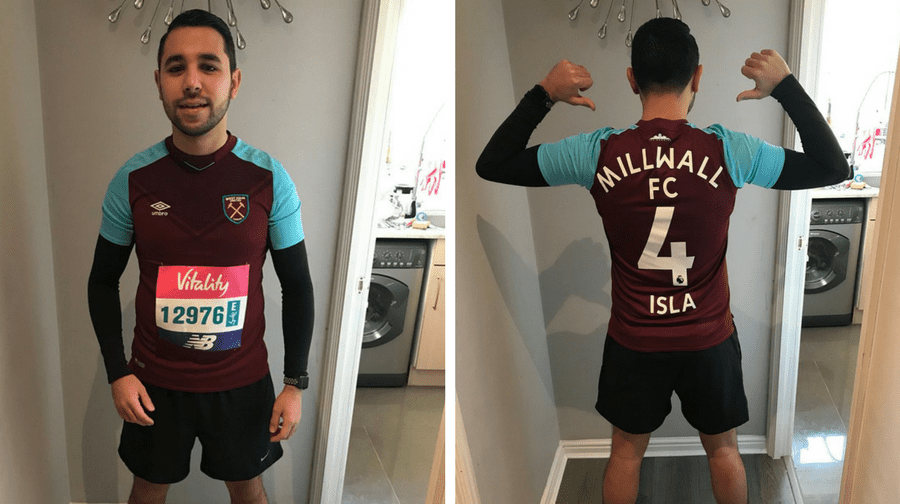 Millwall fan Jamie Pearce ran the Big Half in a West Ham shirt to raise money for Hammers fan Isla Caton, who has cancer

A Millwall fan who ran the Big Half in a West Ham shirt to raise money for young cancer sufferer Isla Caton has almost trebled his target.

Jamie Pearce, 25, bravely donned the Hammers’ colours on Sunday as he ran 13.1 miles, passing through the streets of Southwark in the first ever Vitality Big Half.

The runner’s initial aim had been to raise £500 for three-year-old Hammers fan Isla Caton who suffers from rare childhood cancer neuroblastoma and needs specialist treatment in America.

But a quick check of his sponsorship page after the race on Sunday revealed he had almost trebled his original target by so far raising £1,250.

Speaking to the News after the race, Jamie, a young father himself, said: “It went really well – although I had a sickness bug Friday night. So Saturday morning I was so tired and had nothing in me, so I spent the whole day trying to refuel and went for pie and mash and then to Millwall.

“I went to the race on Sunday morning and felt quite good about it – I didn’t struggle until towards the end and it was probably my favourite race.”

“As I went through east London with the shirt on all I was getting was shouts of ‘West Ham’ and ‘up the Hammers’ and I made sure I shouted out ‘I’m Millwall’ and pointed to my back,” he added. “There were lots of people who realised I was the lad running it in the West Ham shirt and they were cheering me on. Going through Bermondsey, a lot of people had retweeted so I got a chant the whole way through and I was joining in with that. It was great.

“It was amazing the amount of support and good will I got from everybody on Twitter and it’s been fun – I’ve had a lot of banter.

“On the Big Half records I did it in 2hrs 6secs but on my watch the running time was 1hr 53mins so it was a good time and was a PB on a  race for me.”

Jamie, who lives in Bromley and works in recruitment alongside studying an economics degree, said he also got the chance to meet Isla’s dad Michael at the Millwall match on Saturday, where he was a special guest.

Isla’s family, who live in Stratford, had initially hoped to raise £192,000 to send her overseas for a potentially life-saving bivalent vaccine which could help prevent her cancer from returning once she is in remission.

However, they recently shared the devastating news that Isla’s cancer has relapsed and that they are now aiming to raise £400,000, as she will need additional treatment not available on the NHS.