Nick, from Peckham, also thanked his fellow Millwall supporters for their support 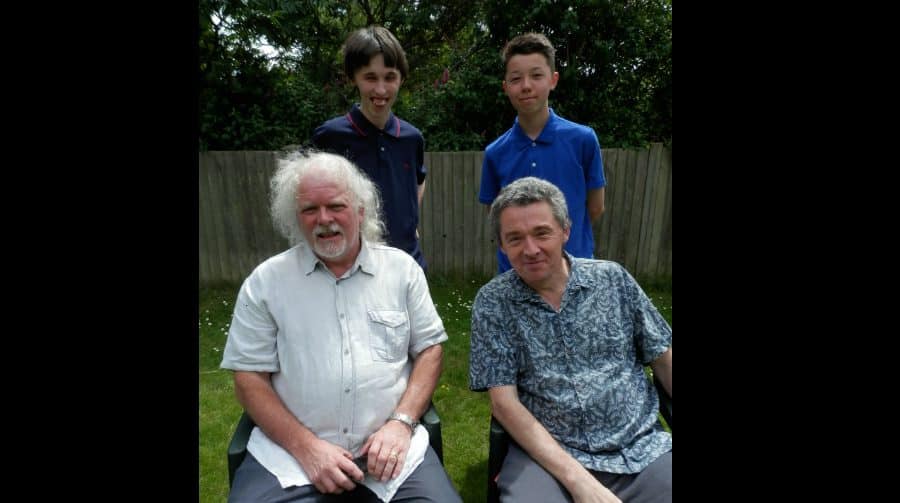 Ben and Jimi, their dad, Mike, and Nick

A Millwall supporter who took on Manchester City after they refused him entry to their ground has urged other fans “don’t give up” if they feel they have been unfairly treated by football clubs, writes John Kelly…

Nick Weavis, a 65-year-old retired schoolteacher, was left standing in the rain with his friend Mike King, and Mike’s two sons Ben (20) and Jimi (13), after a cashier at the Premier League club refused to sell them tickets to their clash with Swansea last December 12.

The group had travelled north to attend Millwall’s fixture with Oldham at Boundary Park before it was rained off shortly before kick-off.

With over four hours to kill before their train back to London, they decided to take in the Premier League fixture in Manchester. However, when it became apparent they were Millwall fans, they weren’t allowed to purchase match tickets.

“We didn’t have any single identifying gear on whatsoever,” Nick told the News. “We had our winter gear on and we were absolutely drenched.

“We got to the ticket office and to get the cashier’s sympathy we told her we’d hot-footed it over here from Boundary Park because our match had been called off. That’s the only time they would have had any indication that we were Millwall supporters.”

Mike had wanted the group to sit together, as Ben is autistic. The cashier disappeared for 60 seconds before returning to inform them they would not be sold tickets based on police advice.

Nick said: “When I got home I thought about it and I spoke to a couple of mates and said ‘I’m not having this, I’m going to follow this up.’”

Nick complained to City, who refused to budge. Annoyed by their attitude he then contacted Millwall chief executive, Andy Ambler, who referred him to the Football Supporters’ Federation. Through the FSF, the Independent Football Ombudsman became involved, while a Freedom of Information request, sent by a Manchester City season-ticket holder who is a friend of Mike’s, revealed the Greater Manchester Police had not given the advice cited.

The IPO last week upheld Nick’s complaint, stating: “the Club’s handling of the complaint could have been much better. An initial expression of regret over the complainant’s disappointment regarding what had happened, when he was seeking no more than an apology, might well have concluded the matter”. It added it was “wrong in attributing the refusal of entry to police advice” and that the Premier League, who also became involved, “sympathised with the complainant and pointed out that the club’s response lacked empathy”.

Nick, from Peckham, has been attending Millwall games since 1963 and has missed just one match in the last two years – at Scunthorpe last season when he was attending his friend’s 70th birthday.

Nick said he had never been refused entry to a football stadium before, but admitted there is a stigma attached to being a fan of the Lions. “When you say you’re a Millwall supporter you’re on the back foot and you’ve got to defend yourself.

“For many years I was defensive about it but for the last 20 years I thought, ‘No, I am a Millwall supporter and most of us are brilliant’. Rod Liddle, of the Sunday Times, is a Millwall fan, so we’re not all thick! That was a clear taste of discrimination, and the stereotypical image of us being unwelcome.

“We were just four people who wanted to see a Premier League game. The kids don’t get the chance – we’re taking them to places like bloody Rochdale!

“Anyone with any jot of common sense would have looked at four normal people standing there in torrential rain and let us is.”

Nick praised the support of FSF’s Amanda Jacks through a process that began last January. The IFO, meanwhile, recommended “that the Premier League consider including in their guidance suitable arrangements to cater for casual visitors”. The League is currently assessing those types of purchases.

The story had a happy ending of sorts. Although Nick is still waiting for an apology from Manchester City, he returned to Boundary Park to watch Millwall defeat Oldham 2-1 in the re-fixed game in January. City have also offered them complementary tickets to a future game.

Nick, who said “Millwall fans have been 100 per cent supportive” of his position, had some advice for football supporters: “Don’t give up even if you get treated (badly) everywhere you go. Keep going if you feel you’re in the right, if you feel you’ve got a justified case. Keep pushing and knocking on doors and see where it gets you.”

“We have to go to places like bloody Rochdale”, says the resident of Peckham, jeez! Might come as a bit of a shock but Millwall fans are in general not liked.

Chortle. Hey Bluedave, you’re as touchy as us Millwall supporters. I recently read a wonderful book about your beloved but hapless Rochdale.

Not a Rochdale fan or indeed a resident of Rochdale Davy, by the way what’s the book title, l like a good read!

Oh sorry about that Bluedave. The book is called ‘Spotland: The Sun Also Rises – And Other Football Stories’ by Mark Hodkinson. It’s really quite charming. There’s also a new book written by all their recent beleaguered managers.
The best Millwall book by the way, and one of the best and funniest books ever is ‘Only A Game’ by Eamon Dunphy.

Thanks Davy, sounds like a good choice for a holiday read, all the best for the coming season.

Hope you enjoy it BD. Do you have a team?

I’m a lifelong Manchester City fan Davy, but over the years I’ve watched most of the teams in the area with workmates etc., so I try to keep up with their form, pretty sad to see the plight that the majority of the local clubs are in, but that’s another story.

Dont know if my 1st. reply reached you Davy if not I’ll reapeat it anyway, yes Ihave a team, I’m a lifelong Manchester City fan,which is the reason I was interested in the original article. I also have a look to see how the other local teams are going, hence the support for Rochdale!

Yes I did get it BD. Manchester City eh? Everyone’s favourite second team, at least until recently! I’m just about old enough to remember the title winning side of 1968. For an all too brief while there were lots of City supporters in South London. The amazing title win a few years back was special and pretty nuts in the way you won it. I’ll also never forget that Dennis Tueart league cup winner against Newcastle. Your third division days were fun weren’t they?