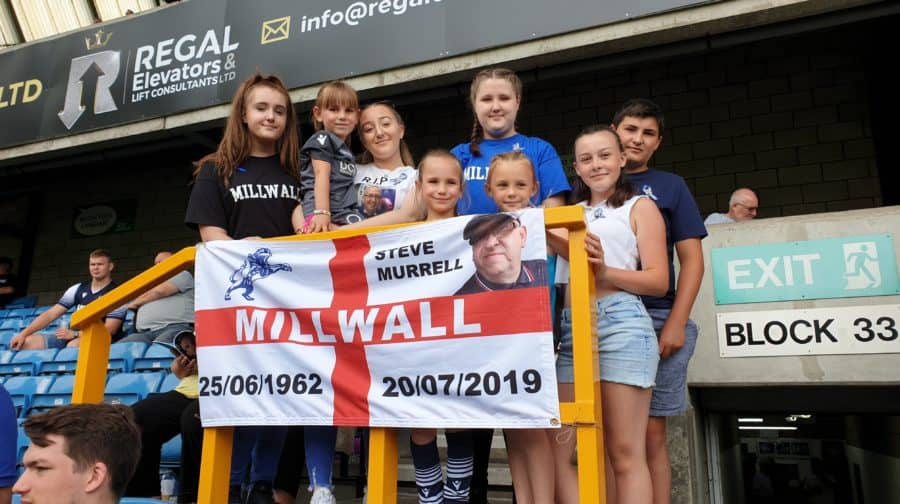 Millwall fans honoured the emotional appeal of a teenager to pay tribute to her late dad by clapping on the 57th minute of Saturday’s game against Preston.

Maisie Murrell, aged fifteen, had appealed to Lions fans to clap on the 57th minute as her father, Steve, was only 57-years-old when he passed away suddenly on July 20.

Her call, which was also shared by the News in a front page story, struck a chord with both home and away fans – and a minute-long sound of applause rang out across The Den in Steve’s memory.

Steve’s niece and goddaughter, Louise Gaul, said the reception from fans at the game had been ‘just phenomenal’. “Maisie was thrilled to bits, she was so happy with it,” said Louise. “We’re just so proud of her.

“My uncle was such a humble bloke, he never would have something like this happening for him.”

Relatives of the dad-of-three – to Maisie, Billy, 29, and Kerry, 25 – donned t-shirts in memory of Steve, some including doting nicknames he had, such as ‘Big Dog.’ For those without t-shirts in memory of the ‘old-fashioned south London lad’, Louise made remembrance ribbons.

“I have also been asked to make more for Steve’s funeral which will be lovely so it’s nice that people will be wearing them again,” she said.

A funeral for the electricals company worker who grew up in Peckham and lived in Kennington, will be held later this month.

“A wonderful applause at The Den from the Millwall family and the Preston supporters, too,” said Millwall FC. “Rest in peace, Steve.”

The club had also urged fans to take part by putting details of the tribute to in the programme and announcing it over the tannoy.

Family members are also looking into the possibility of getting a black and gold remembrance plaque installed at the block of seats where the lifelong fan would sit during games at The Den.