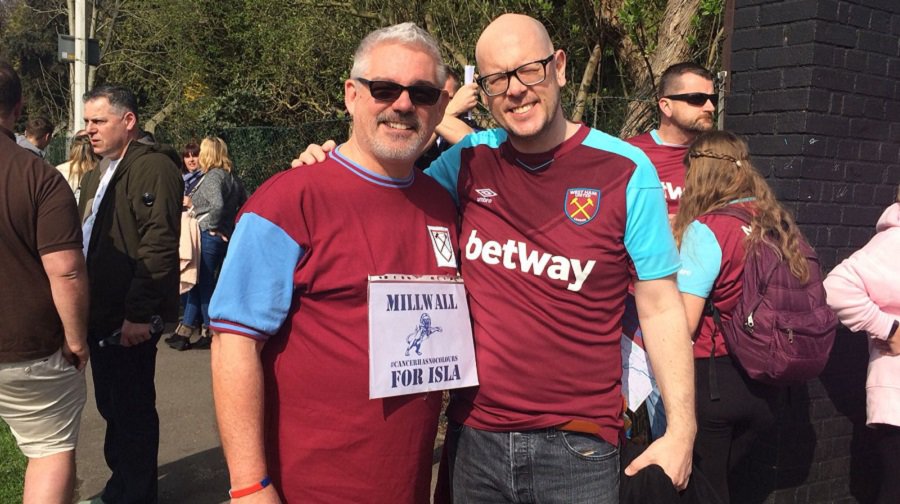 A pair of Millwall fans have raised more than £4,000 for a young cancer sufferer after walking shoulder to shoulder with West Ham supporters for ten miles.

Nick Hart and Bill Slack donned West Ham strips as they joined a group of Hammers fans for a sponsored walk on Saturday in aid of three-year-old Isla Caton who has neuroblastoma.

The Lions supporters walked from West Ham’s training ground at Rush Green to London Stadium for the Stoke City game on April 14 to raise money for Isla to travel overseas for specialist treatment.

In total, four Millwall fans have so far managed to raise an incredible £27,300 for Isla.

Speaking to the News after completing the walk, Nick said: “The actual amount generated from Millwall fans is astonishing given it’s a West Ham fan at the centre of it all.

“I think there’s the hook of Millwall and West Ham being on the same side but I think that it’s mainly the strength of Isla’s story.” Nick said all of the West Ham fans were “very friendly and welcoming” on the day – which saw him wear claret and blue for the first time in his life.

“I think they didn’t know what to expect when two Millwall supporters were turning up at their training ground,” he said.

“But we walked with one of the fans, Mark Little, who’s a boxer, and everyone I spoke to was great – there was no one there who I wouldn’t share a pint with.

“It was a very similar club and fans to Millwall.”

“I finished up in the Boleyn Arms, a well-known West Ham pub, and I’m probably the only Millwall fan who’s walked in and walked out rather than being thrown out,” he joked. “It was a really nice day and a great cause.”

Isla’s family, who live in Stratford, had initially hoped to raise £192,000 to send her overseas for a potentially life-saving bivalent vaccine which could help prevent her cancer from returning once she is in remission.

However, they recently shared the devastating news that Isla’s cancer had relapsed and that they were now aiming to raise £400,000 as she will need additional treatment not available on the NHS.