Big-hearted fans raised almost £10,000 which will go to restoring a historic 1965 ambulance 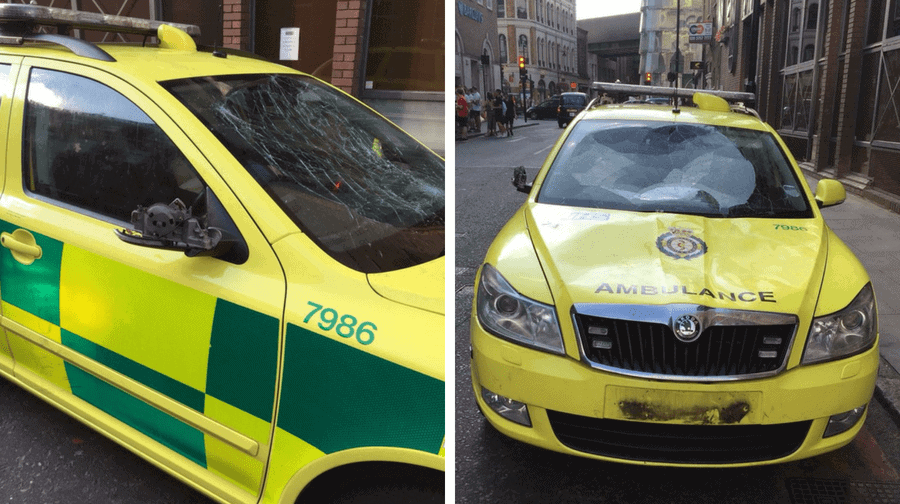 The ambulance was damaged by revellers during the World Cup

Kind-hearted Millwall supporters have been thanked for raising £10,000 for the Ambulance Service after one of their ambulances were trashed during the World Cup.

Revellers celebrating England’s win in the quarter-finals  vandalised the roof of an ambulance near Borough Market, taking it off the road for emergency calls.

After the damage went viral, fans from the Millwall FC Supporters’ Club stepped in – and said they would fundraise to repair the emergency vehicle if necessary.

At the same time, a ŠKODA dealership offered to repair the vehicle free-of-charge, so the money has gone to restore a historic 1965 ambulance. Millwall supporters present medics with the cheque for almost £10,000

London Ambulance Service Chief Executive Garrett Emmerson said: “We were very humbled by these two acts of generosity, from the Millwall FC Supporters’ Club and from Rainworth ŠKODA.

“The Millwall Supporters’ Club fundraising campaign, and the money donated from people across the world means a lot to me and everyone at London Ambulance Service.

“We are also very grateful to ŠKODA for their generosity in repairing the car so it can be back on the road quickly, going to those in need. London Ambulance Service staff in the 1960s. An identical Morris Wandsworth is kept in The Service’s Historic Collection

“It is fantastic that the Supporters’ Club agreed that the money they raised could instead go towards restoring an ambulance from our historic collection, which will now be a lasting reminder for years to come of our proud history and Millwall fans’ generosity.”

The  Morris Wandsworth ambulance, will be displayed at the London Ambulance Services’ headquarters in Waterloo. The supporters’ club presented a cheque for almost £10,000 to medics from London Ambulance Service at the side of the pitch before the Lions’ match against Swansea City earlier this month.

Kathryn Gale, Chair of the Millwall Supporters’ Club said: “A spur of the moment idea results in a long lasting legacy. Millwall fans can always be relied on to get behind such issues and it was heartening to see how other clubs’ fans supported the cause.

“Good job done, we look forward to seeing how the project progresses.”