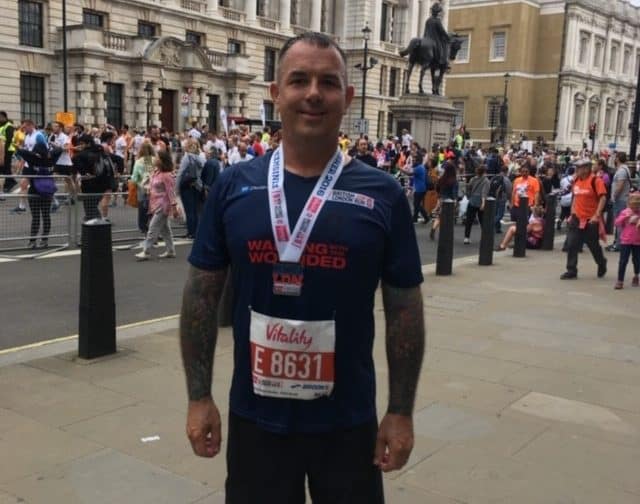 Millwall supporter Steve Rendell, pictured) will be running the marathon in Harveys name

A Millwall supporter is planning on running a half-marathon for a rare diseases charity, after being inspired by the club’s super-fan Harvey Brown.

Steve Rendell, from Reading, is planning to run the gruelling London Landmarks Half Marathon in March next year in aid of the MPS Society, which helps those affected by a rare body of life-limiting diseases.

Steve, aged 50, wrote on his JustGiving page: “Harvey is one of our own and Millwall’s favourite mascot and lives a stone’s throw from The Den.

“He is just one of 78 children in the UK with the ultra-rare disease, Morquio, which is an inherited illness and means children like Harvey rarely grow above 3 foot tall or live beyond their twenties.”

Steve, who has previously fundraised for Help for Heroes with a daring 13,000 feet skydive, told the News that he wanted to run in Harvey’s name because he is “lovely little lad.”

So far, the sponsored run in the Bermondsey boy’s name has raised over £500 for the MPS Society, over a quarter of its target amount of £2,000 in less than a week. Harvey, pictured in Millwall’s 2016-17 stripes, has the rare Morquio syndrome

Money raised from the run will be used by the charity to provide professional support to people and families affected by MPS syndromes – of which Morquio is one.

Doting dad Dean said: “Steve got in touch with me and said ‘I want to do it in Harvey’s name because of the Millwall link’ and said Harvey’s such an inspiration.

“I couldn’t believe it, I said that was lovely. I couldn’t thank him enough for it, it’s brilliant.

“It’s a small charity, it’s not one of the mainstream charities.

The money goes towards children who need wheelchairs and days out, things like that.”

Nine-year-old Harvey is doing well, said Dean, despite the debilitating syndrome – which his family attribute in part to the support and generosity of the club’s fans.

Dean said: “We have noticed a big difference in him, we’ve had loads of people coming up to us and saying how well he looks. He’s come on really well with it.

“That’s all down to Millwall fans again, we can’t thank them enough for what they keep doing.

“People like Steve, who want to do things in Harvey’s name – it’s lovely.”

The half marathon takes place on March 24th. Further details of Steve’s half-marathon can be found here: www.justgiving.com/fundraising/Steve-Rendell1