“We are all united for a fallen hero, a Millwall hero,” said the fans behind getting the bench installed 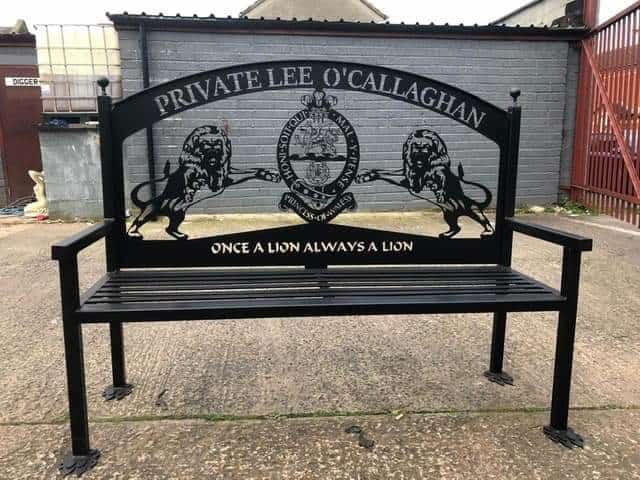 A memorial bench to a Walworth war hero who died while serving in Iraq will be unveiled at The Den this Saturday, after generous fans raised more than £2,000.

Pte Lee O’Callaghan was sadly killed in August 2004 in Basra aged just twenty, after being fatally shot in the chest by Shia militiamen.

A street in the keen Millwall fan’s name was unveiled in Walworth in 2017, connecting Heygate Street with Wansey Street.

Now the pair of Lions fans who helped campaign to have O’Callaghan Way installed have succeeded in their bid to have a memorial bench for Lee placed at his beloved Den.

“The fact Lee was a Millwall fan and a kid I remember from growing up in Walworth and one John knew too meant his memory is close to us,” said Lee Evans, who led the campaign to get the bench installed alongside fellow supporter John Davies.

“Myself and John had worked on the road-naming project and this has just came from there,” added the 44-year-old retired civil servant. Both he and 58-year-old John have been taken aback by the generosity of Millwall fans who dug deep into their pockets to purchase the bench from Belfast, and praised for the Club for its help.

“The fans have been unreal,” he said. “Our fans’ generosity has always been known but this appeal has taken it beyond belief.

“The Club have been amazing. The attitude has basically been ‘Tell us where you want it placed and how we can help.’”

They hope that the bench will provide a focal point for fans to always remember the sacrifice that Lee made in his service – and bring comfort to his family fifteen years on from his death.

“I think it’s been a difficult time for Lee’s family with it being the 15th year since his passing,” said Mr Evans, who has been going to Millwall games for four decades.

“Hopefully the bench will give them a focal point and they know that the Millwall fans will never forget the sacrifice our own hero made.” The bench for Lee will be officially unveiled at 12noon before the game against Charlton FC on Saturday, November 9.

Fans raised more than £2,000 to pay for the bench, with a donation from Millwall sponsor Huski Chocolate.

The young soldier had been on duty with the 1st Battalion of The Princess of Wales’ Royal Regiment for five months when he was killed, with only one week left before he was due to return home on leave.

The popular recruit was remembered by his commanding officer upon his death as hardworking, brave, and well-known for his sense of humour.

“He was an avid football fan and keen supporter of Millwall,” said Lt Col Matthew Maer. “As a midfielder player himself he took every opportunity he could to play football.”

The tribute will now stand as a Den landmark for fans to remember the sacrifice of the young war hero.

“We are all united for a fallen hero, a Millwall hero,” added Mr Evans.

Brilliant news. We all stand together. Xx